Native to Wisconsin and Minnesota in the United States, and due to their medicinal purposes, blueberries were popular among Native American tribes for hundreds of years prior to the European colonization of North America. It wasn’t until about a century ago that blueberries were domesticated for commercial production. Since then, these tasty berries have become incredibly popular throughout the United States for their antioxidant properties and delicious taste. 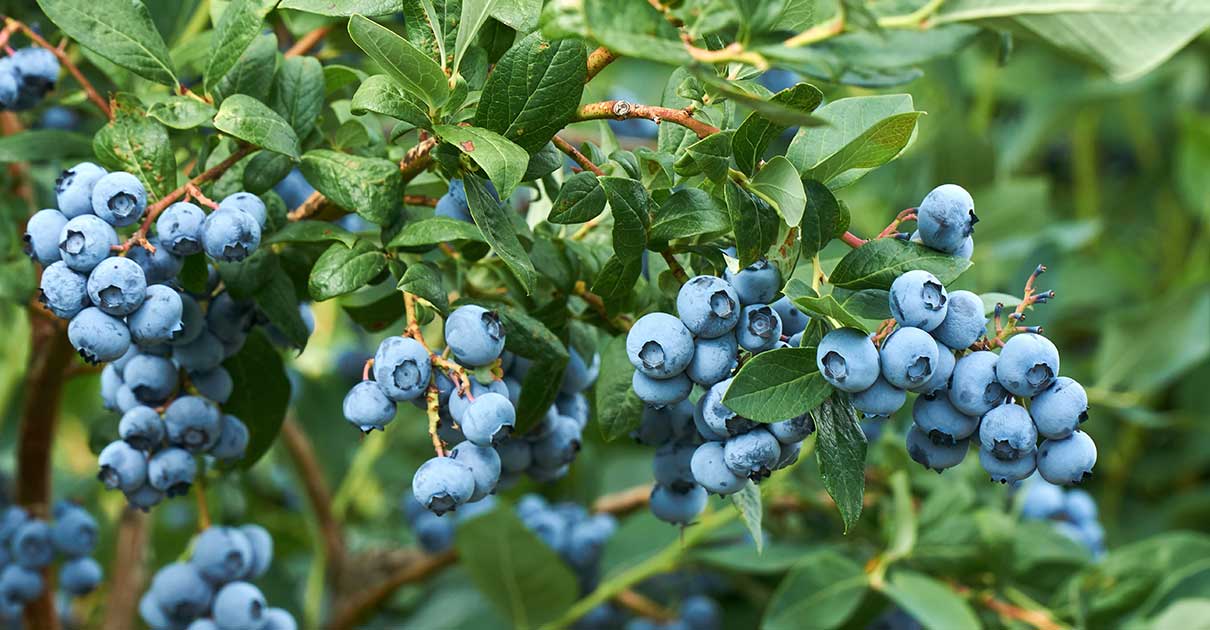 Blueberries have recently been dubbed a superfruit for their high levels of antioxidants. (1) Antioxidants are phytochemicals that are found in various fruits and vegetables and are incredibly important for all over body health. Antioxidants play a huge role in fighting free radicals, which are unstable molecules in the body that cause a variety of different ailments.

Even though there are a variety of different causes of cancer, it is believed that free radicals play a huge role in altering DNA and the development of cancer. Antioxidants also can prevent developed cancer cells from metastasizing to other parts of the body and can play a role in killing the stem cells of cancer.

Antioxidants found in blueberries are also important in keeping the brain healthy as we age. Millions of Americans every year suffer from Alzheimer’s, dementia, and other age related cognitive illnesses. Recent studies have shown that blueberries have the highest amount of antioxidants of any fruit or vegetable, and when taken daily, these antioxidants can improve memory, learning, and balance. (2)

Blueberries may even be able to reverse some of the damage a brain has already sustained. Research is very preliminary at this point, but there are some very promising results that may play a role in the future as to how the aging brain is treated.

Blueberries, for their small size, are surprisingly high in fiber. Fiber, while not digestible, is important to keep the large and small intestine healthy by keeping other waste moving out of the system, helping prevent constipation as well as helping with chronic diarrhea related to irritable bowel syndrome and inflammatory bowel disease. The vitamins, nutrients, and acids found in blueberries can also keep the stomach healthy.

Inevitably, as we age, our bodies show signs of growing older, from hair loss to age spots, from to cataracts to wrinkles. The many different types antioxidants in blueberries play a huge role in protecting the body against premature effects of aging.

It is believed that anthocyanin, a phytochemical that gives blueberries their vibrant color, plays a major role in anti-aging. Blueberries are also packed with Vitamin C, which is also an antioxidant for aging prevention.

5. Blueberries Can Help With Weight Loss

According to the Center for Disease Control, nearly two-thirds of American adults and one-third of American children are classified as overweight or obese. Obesity can play a role in a variety of different major illnesses, and doctors suggest a weight loss plan involving healthy diet and regular exercise to achieve a lower weight.

Blueberries are low in calories and high in fiber, which helps to keep you feeling full longer. Studies have recently suggested that blueberries can help trim down stomach fat, which in excess, increases the risk of heart attack and diabetes. (3)

6. Blueberries are Great for the Skin

Blueberries do not directly impact hormone production, but they are very high in Vitamin A. This vitamin works to neutralize oils on the skin, which in turn can prevent blackheads and pimples.

For those with delicate skin, spider veins are often a common complaint. Spider veins are small capillaries that become damaged and visible directly under the skin. The significant amount of Vitamin C in blueberries can help keep your cardiovascular system healthy and strengthens the veins and arteries directly below the skin, helping to prevent and heal spider veins. (4)

Millions of Americans suffer from a variety of different heart and cardiovascular conditions, and heart disease is the leading cause of death throughout the world. High levels of bad cholesterol, also known as LDL, play a major role in the development of heart disease, high blood pressure, heart attack and stroke. Recent studies have suggested that the high levels of antioxidants, particularly anthocyanin, in blueberries can help to break down the build-up of bad cholesterol in the veins. (5)

8. Blueberries May Help With Diabetes

In the United States, nearly ten percent of adults suffer from diabetes, and nearly twenty-five percent of those who are suffering from diabetes are unaware that they are impacted by this serious disease. Diabetes is a serious disease that should always be treated in consultation with a physician or other medical provider, but there is promising research that shows that blueberries may have a positive impact.

Research has shown that the high levels of fiber and various antioxidants in blueberries help increase insulin sensitivity, which allows the body the regulate blood sugar levels in a more efficient way. (6)

Urinary tract infections are an uncomfortable ailment that affect many women and elderly Americans on a regular basis. Even though infections that impact the bladder and the urethra are more uncomfortable rather than dangerous, if the infection is left untreated it can result in a much more serious kidney infection.

When sufferers feel the tell tale signs of UTI, they often reach for some cranberry juice, but evidence supports the major role that blueberries, a close cousin of the cranberry, play in treatment and prevention. Proanthocyanidins, a type of antioxidant, help to ensure that e. Coli and other bacteria are unable to stick to the walls of the urinary tract. The high levels of Vitamin C also help to kill any remaining bacteria in the system.

Blueberries have been consumed throughout the Great Lakes region of the United States for hundreds of years by Native American tribes that were fully aware how healthful this beautiful fruit is.

While any diet needs to be balanced with plenty of fruits, vegetables, whole grains, and lean proteins, regularly adding blueberries can play a huge role in overall health and longevity.

Nutritionists suggest adding one cup of blueberries into your diet every day for maximum benefits, and whether cooked or raw, blueberries are sure to help keep you healthy.