If you’re a fan of cucumbers (or you just happen to have them in salads or on sandwiches once in a while), you may be interested to know that cucumbers have many health benefits. Cucumbers are 95% water, hence they are low in calories as well as dietary fat. It is for this reason that they make a great addition to any weight loss diet. Cucumbers or cucumis sativus, belongs to the same family as melons and squashes. They are commonly sold as two types: slicing cucumbers for fresh consumption, and pickling cucumbers for processing. 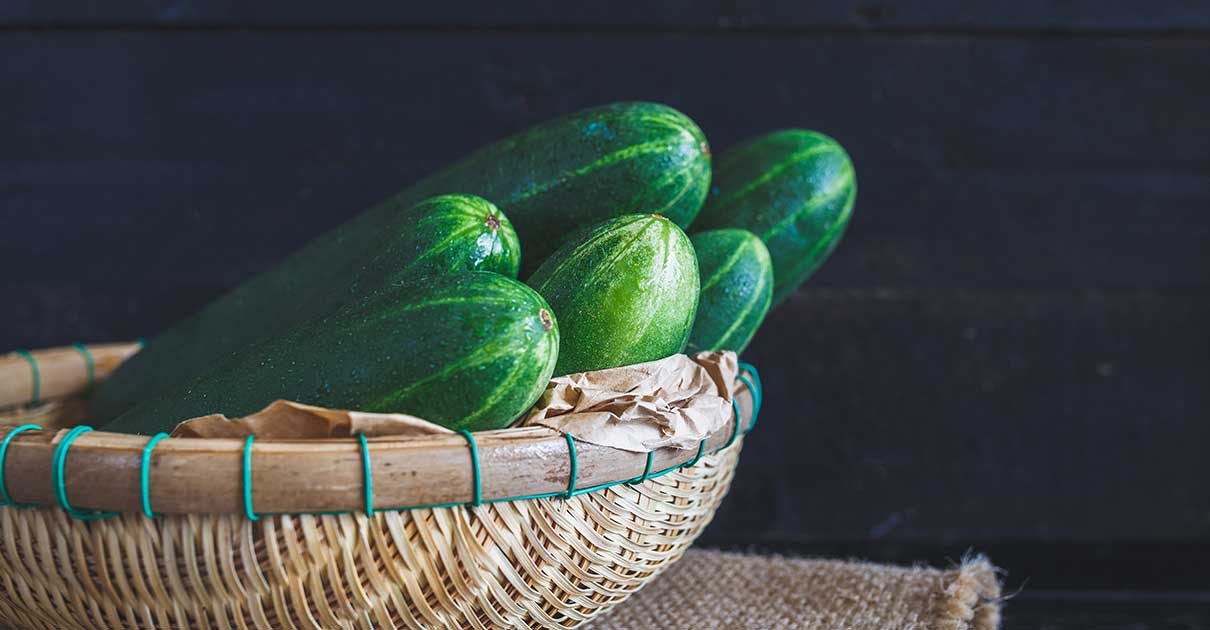 One cup of sliced cumber only contains 16 calories and 0.2 grams of fat. Cucumbers are also the ideal snack for hot weather because of their cooling and refreshing taste. (1)

Cucumbers are famous for their health and aesthetic benefits for human eye. If you have ever worn a face mask or you suffer from puffy and tired eyes, you may have already tried using cucumbers. It is effective for reducing water retention and rejuvenating the eye area. (2) However, that’s just the tip of the iceberg; its uses are not limited to facial care.

1. Cucumbers are An Effective After-Sun Treatment for Tanning and Sunburn

We’ve already seen that cucumbers are good for refreshing and cooling the eyes, but did you know that cucumbers can also be used as treatment for sun exposure? Cucumbers have antioxidant and analgesic properties, and their natural watery texture can do wonders for healing the skin after spending time under the sun. (3)

Simply chill thinly sliced cucumbers in the fridge for a couple of hours, or apply them directly onto the skin. Another alternative is to make paste out of the chilled cucumber so that it can be applied onto the affected area more evenly. (4)

After-sun products can be quite costly and are often filled with synthetic ingredients that may or may not cause a reaction with the already-sensitive skin. Cucumbers are a natural alternative that are just as effective but are not likely to cause skin irritations.

Vitamins and minerals are essential for overall health and longevity. People who have a vitamin K deficiency have a higher risk of developing bone fractures and breaks. Just one cup of chopped cucumbers makes up 11% of your recommended daily vitamin K intake, adding only 50 calories or so to your daily caloric intake. (5)

3. Cucumbers are a Good Source of Vitamin C

Vitamin C is important for bones because it helps create collagen, which is essential for the development and repair of the skin, nails and bones. One cup of cucumber provides 4% of your daily recommended intake of vitamin C. While citrus fruits like oranges and grapefruit are popular sources of vitamin C, you can also get your fill through incorporating cucumbers into your diet. (6)

4. Cucumbers are an Excellent Source of Antioxidants

Cucumbers contain antioxidants such as lutein, zea-xanthin, vitamin A, vitamin C, ß-carotene and a-carotene. These are protective compounds that protect the body against reactive oxygen species (ROS) and oxygen-deprived free radicals, both of which play a role in various disease and aging processes. (7)

Cucumbers contain a flavonol called fisetin that has been shown to play an important role in cognitive function and brain health. In addition to protecting nerve cells from age-related degeneration and improve memory, fisetin has also been found to prevent learning impairments and prevent progressive memory decline. (8)

Cucumbers also contains a mineral called molybdenum, which is vital for enzyme functions throughout the body including the brain for proper motor control and memory retention. (9)

Cucumbers are full of vitamins, minerals and water, all of which can help maintain healthy skin and complexion. As mentioned previously, cucumbers are a good source of vitamin C, but they also contain potassium, magnesium and cucurbitacins.

Cucumbers are often used in skin care products because the natural ascorbic and caffeic acid found in cucumber can naturally prevent water retention in the skin, which will help reduce swelling under the eyes and even heal eczema. (10) Cucumbers are are also good for hydration. Hydration is crucial for preventing visible signs of aging, which can lend the appearance of fresher, more youthful looking skin. (11)

7. Cucumbers May Reduce the Risk of Cancer

Cucumbers contain several polyphenols that can help lower the risk of developing certain cancers. These polyphenols are made up of three lignans called pinoresinol, lariciresinol and secoisolariciresinol. These polyphenols been proven to help lower the risk of prostate, breast and uterine cancers as well as help protect against cardiovascular diseases. (12) Studies show that cucumbers could also help prevent leukemia in adults because it suppressed the growth of leukemia cells in subjects who consumed cucumbers. (13)

Cucumbers are also a source of cucurbitacins, which is a group of phytonutrients that have been shown to have anti-cancer properties. A research paper published in 2013 entitled “Cucurbitacins — A Promising Target for Cancer Therapy” found that cucubitacins have anti-tumor activities in human cancer cells. These results count towards growing evidence that cucumbers are an effective cancer-fighting food. (14)

While stale breath is considered normal, unusually foul-smelling breath may be a sign of an underlying disease or condition. For those who would like to reduce their bad breath and improve oral health, vegetables such as cucumbers and celery may stimulate the production of saliva, which would help halitosis-causing bacteria. In addition, cucumber and other crunchy vegetables may remove plaque, protecting you against tooth decay. (15)

If you’re short on time and need to ward off bad breath quickly, you can also take a slice of cucumber and put it under your tongue for 1-2 minutes to help get rid of any unpleasant odors. Cucumbers are over 90% water and helps flush out the bacteria that could cause bad breath. (16)

Cucumbers are naturally anti-inflammatory and could relieve heartburn and any related ailments. Cucumbers are alkaline vegetables and do not contain a lot of acid so as not to contribute to the condition. It may also work to neutralize acidic foods that have been consumed.

Cucumbers are also over 90% water and so they may be able to help cool down your body and wash away any excess toxins. (17) Some animal studies also suggest that eating cucumber could reduce excess inflammation because it inhibits pro-inflammatory enzymes such as COX-2.

Cucumbers may be able to aid and improve your digestive system because they contain water and fibre, the two most important elements needed for maintaining healthy digestion. If you add more cucumbers into your diet the mixture of fibre and water can help cleanse your system, and cucumber juice is especially helpful for people who suffer from regular heartburn, acid reflux and gastritis. (18) The skin of the cucumber is a good source of fiber, which aids in digestion and flushing out waste materials out of the body to ensure a healthy digestive tract.

Cucumbers contain several B vitamins and they are also a good source of carbohydrates, which is the body’s preferred fuel source. If you’re feeling low on energy and don’t want to spike your insulin, cucumbers are a safe choice since it scores low on the glycemic index.

Cucumbers contain a wide range of vitamins, minerals and associated health benefits. Most people already know that cucumbers are low in calories and can help reduce and rejuvenate puffy eyes, but that’s just the tip of the iceberg.

Cucumbers can help treat sunburn and are a natural alternative to after-sun lotions. They promote bone health, memory and skin health. Cucumbers can also reduce your risk of developing cancer.

Cucumbers are inexpensive and tasty and it’s not particularly hard to incorporate them into your diet. The next time you go shopping, why not pick up a few cucumbers and see if you notice the difference?