Fish is one of the most widely consumed proteins in the world, with nearly five billion pounds of fish consumed yearly in the United States. It is no wonder why it is such a popular food, since it is much lower in saturated fats than other sources of protein, high in protein, and high in Omega-3 Fatty Acids. Salmon, rainbow trout, sardines, tuna, and anchovies are all high in fatty acids, which are necessary for many healthy functions in the body that is not produced in large amounts naturally in the body. 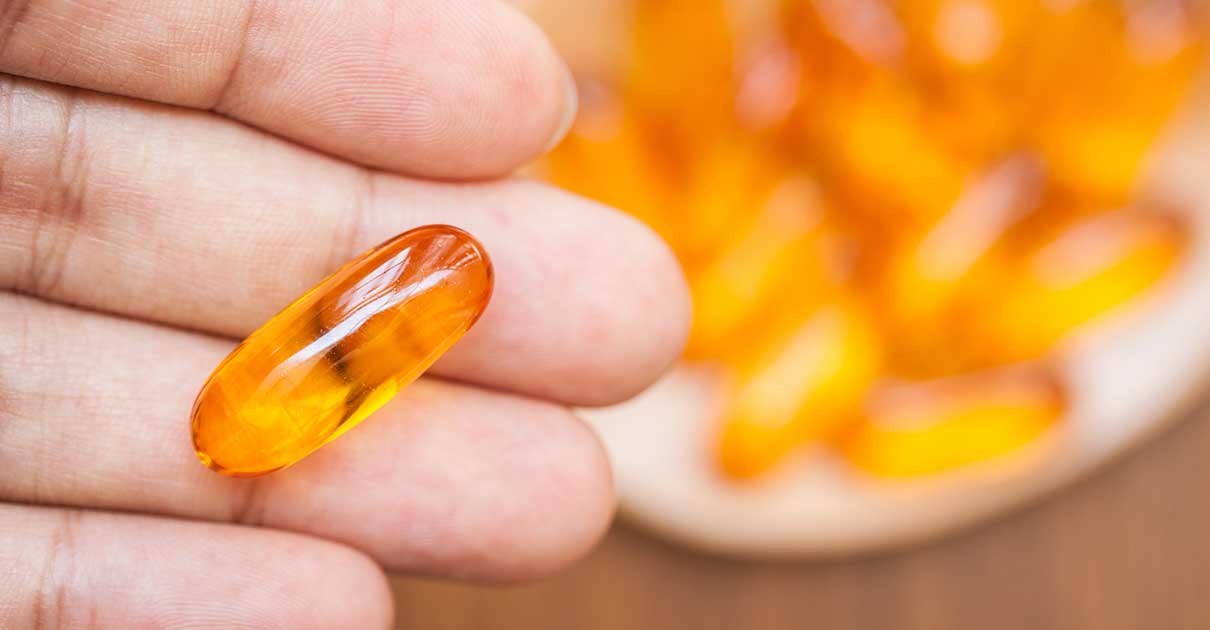 For those who do not like the taste of fish or are worried about the potential for high levels of mercury in regular fish consumption, fish oil supplements can be a great way to reap the benefits of Omega-3 Fatty Acids. The two most important fatty acids in fish oil supplements are DHS and EPA. (1)

Below are twelve benefits of regular consumption of fish oil supplements.

1. Fish Oil Can Help With the Symptoms of ADHD

Unlike some supplements that adults can safely take but children shouldn’t, fish oil supplements can safely be consumed by people of all ages. New diagnoses of Attention Deficit/Hyperactivity Disorder, also known as ADHD, in both children and adults are on the rise in the United States, as is the prescription of potentially dangerous prescription psychotropic drugs. While severe cases of ADHD will not see enough benefits to remove medication, omega-3 fatty acids can help increase attention spans. (2) In combination with other supplements such as evening primrose oil or zinc, these benefits may increase.

It is important to talk to your doctor about any supplements you are taking in conjunction with prescription medicine to ensure there aren’t any potential side effects.

2. Fish Oil Can Help to Ease Anxiety and Depression

Anxiety and depression are the two most common mental health concerns in the United States, annually affecting three million and fourteen million adults respectively. While no one fully understands the exact cause of these two illnesses, there are studies that show that the omega-3 fatty acids can help ease the symptoms. In one study, omega-3 fatty acids were found to decrease inflammation in the brain caused by two proteins: IL-6 and TNF-Alpha, which helped to lower anxiety levels in medical students. These two proteins are also lowered with anti-anxiety and anti-depression medications. These benefits have also been seen in those who suffer from bi-polar disorder, which in some cases, can be difficult to treat. (3)

Irritable bowel syndrome is one of the most commonly diagnosed gastrointestinal conditions in the United States, and treatment plans have to be tailored to the individual’s symptoms, as not everyone with IBS presents in the same way. Many people find relief from constipation, diarrhea, cramping, and bloating by utilizing anti-inflammatory medications. Omega-3 fatty acids are known for their anti-inflammation properties and also provides necessary lubrication to the digestive tract, easing extreme pain and discomfort for sufferers. (4)

Heart related concerns are something that most Americans face at some point in their lives. While it seems counteractive to treat heart concerns with more fat, omega-3 fatty acids can be largely beneficial to helping prevent and treat heart related concerns. The American Heart Association reports omega-3 fatty acids can be helpful in prevention of arrhythmias, which are irregular heartbeats, and can help those who are suffering from heart disease.

Heart related concerns need to be carefully treated by a doctor and no major decisions should be made without consulting a physician. A trained practitioner will be able to prescribe the correct levels and can recommend other treatment options in conjunction with fish oil supplements. True heart and cardiovascular health will only occur when a healthy diet and regular exercise is also incorporated to your lifestyle.

5. Fish Oil is thought to be Anti-Carcinogenic

Cancer is on the rise for many countries in the world, including the United States. While there are many different causes of cancer, omega-3 fatty acids can help to decrease the risk of cancer, particularly breast and colon cancer. (5) It is believed that these fatty acids block certain enzymes in the body that promote cancer cell growth. There is also evidence that chemotherapy can be more effective when omega-3 fatty acids are taken regularly during treatment, and may even help reduce the side effects of chemotherapy and radiation.

However, it should be noted that recently there have been studies that have indicated that diets high in omega-3 fatty acids can actually contribute to an increased risk of prostate cancer, which are contrary to other studies suggesting that omega-3 fatty acids decrease the risk of this type of cancer. (6) It is important to receive regular checkups from your doctor and be mindful of fish oil consumptions, particularly if you are over the age of seventy.

6. Fish Oil Can Help With Weight Loss and Diabetes

Obesity in the United States is on the rise, with over two thirds of American adults falling into the overweight or obese category. With such a large market to cater to, there are plenty of weight loss supplements that will promise miracles with little to no effort on the part of the individual attempting to lose weight and be healthier. A healthy diet and regular exercise is necessary to ensure healthy and long lasting weight loss. However, omega-3 fatty acids may help with this epidemic. (7) Many obese individuals have low levels of omega-3 fatty acids and when increasing these levels, individuals have seen a decrease in belly fat, which is dangerous to have around organs, and an increase in fat burning during cardiovascular exercise. It is also believed to increase metabolism rates, which helps improve weight loss efforts as well.

Obesity is closely related with type-2 diabetes, which is also affecting more and more Americans every year. By lowering weight, the risk of diabetes is lower and treatment of the disease becomes easier, as these fatty acids can help to lower insulin resistance. (8)

For years, it has been advised that women who are pregnant avoid most, if not all, fish, due to concerns about the increasing levels of mercury found in wild caught fish, as these can cause major birth defects, such as brain damage and epilepsy. However, by avoiding fish, pregnant women are missing out on the healthy benefits of omega-3 fatty acids for both themselves and their unborn child. (9)

Women who consume enough of these fatty acids decrease their risk of both pre- and post- natal depression as well as gestational-diabetes. It also ensures that women do not experience premature labor. For the unborn child, a healthy amount of omega-3 fatty acids throughout the pregnancy contributes to more brain development in the uterus. This increased development is evident for years after birth. It also helps prevent any ocular issues that can occur in newborns. Many benefits of fish oil are transferred to the fetus through the placenta.

There are many different cure-all treatments for healthy skin, but one of the best solutions, in addition to healthy diet, regular cleansing, and addressing any hormonal disorders, are fish oil supplements. As discussed before, Omega-3 fatty acids are anti-inflammatory agents, which can help to relieve pressure and pain associated with pimples as well as prevent them from happening. Fish oil supplements also are great for moisturizing the skin.

Similarly, for healthy hair, fish oil supplements can promote a healthy level of moisture for hair. Additionally, it can help promote healthier hair follicles, which also lead to less hair loss and breakage.

Fish oil can help to promote a healthy brain in infants and adults. Alzheimer’s and other age related cognitive concerns have been on the rise as the baby boomer generation ages. Alzheimer’s is a complex illness, but is thought to be caused by an increased of Tau proteins in the brain, causing confusion, memory loss, and aggression in those impacted by this potentially devastating disease. Omega-3 fatty acids can help to promote healthy memory and prevent brain shrinkage, a common hallmark of Alzheimer’s disease. (10) It is interesting to note that those in countries who consume the Mediterranean diet, which is characterized by lean protein, including fish, and plenty of fruit and vegetables, have much lower rates of Alzheimer’s than the United States. While genetics can play a part in the development of Alzheimer’s, a healthy diet full of produce and omega-3 fatty acids can play a huge role in prevention.

Arthritis is a painful condition affecting joints. Symptoms include swelling, pain, and stiffness caused when the cartilage in joints begins to break down as a result of age, injury, or infection. (11) Fish oil supplements can help keep the inflammation minimized, thereby decreasing pain in affected joints.

Rheumatoid arthritis is a type of arthritis that is occurs when your immune systems mistakes the tissue in your joints for a foreign body, thereby attacking it and breaking down the soft tissue. Fish oil can actually help prevent this condition from occurring as well as helping ease inflammation. It can also boost the immune system, helping ease the effects of the disease. This immune system boost is seen in other autoimmune disorders such as

Osteoporosis affects millions of elderly adults in the United States, particularly women, and is a result of the production of new bone forming too quickly and old bone not reabsorbed quickly enough. This creates very brittle bones that can break easily. Fish oil helps to prevent bone loss, as well as help with the absorption of calcium, which can strengthen bones in those who are already experiencing osteoporosis.

In recent years, scientists and doctors have found there is more to cholesterol than just being detrimental to one’s health. Now, it is important to minimize the levels of ‘bad’ cholesterol, or LDL, which can build up in the arteries and cause a heart attack or stroke, and maximize levels of ‘good’ cholesterol, also known as HDL, which actual work throughout the blood stream to remove the bad cholesterol. Fish oil, being high in good cholesterol, raises the levels of HDL in the body, removing bad cholesterol from the body. This can work to prevent a whole host of other conditions, such as diabetes and diabetes. (12)

Potential Side Effects of Fish Oil

While fish oil has a host of very positive benefits for your health, there are some potential side effects to be made aware. (13) Most of the side effects from taking fish oil orally are mild, and include bad breath, nausea, burping, and heartburn. Some people also experience rashes and diarrhea as well. These side effects are lessened when fish oil supplements are taken with a meal; people also find that freezing them can be beneficial. If more than the recommended daily dose, three grams, is consumed, the side effects can become more severe. The immune system can be compromised and the blood’s ability to clot can diminish.

It is also essential to consume only purified fish oil to avoid any mercury found in many oily fish. Mercury can cause seizures and disrupt function in almost every major bodily function.

Fish Oil, when taken in moderation, has great all over body benefits for people at every stage in life. While it is generally not advised to eat fish daily for health purposes, it is completely safe to reap the benefits of fish oil on a daily basis. From mental health to physical health, omega-3 fatty acids found in fish oils can be immensely beneficial for many, and can help you live a long, happy, and healthy life.