It seems like every month there is a new superfood that you should have started eating yesterday. Pomegranates, chia seeds, coconut products, and kale are just a few examples that are now topping the must-eat list—and for good reasons. With countless claims being made on the health benefits of different foods, and many of them being backed by research involving human trials, it’s important to separate those that warrant more attention and study. Flaxseed Oil has been heavily researched by experts in the medical field, with varying uses, benefits and applications. It is currently one of the more popular healthy foods for a multitude of reasons. 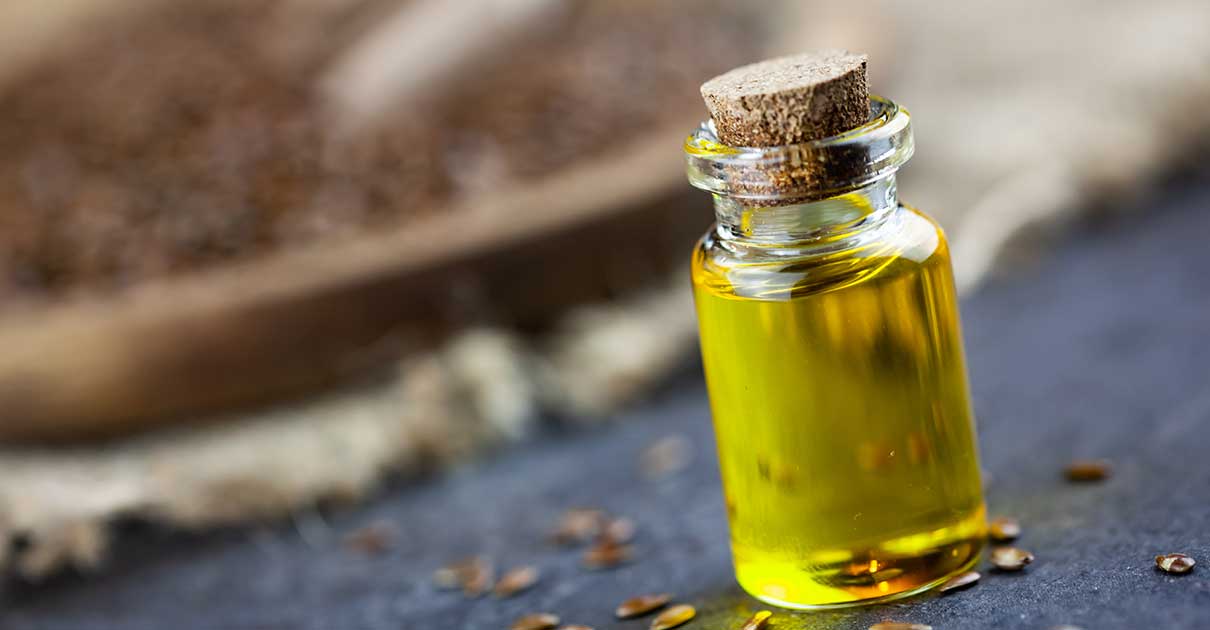 What is Flaxseed Oil?

Flaxseed oil, as the name implies, is oil that comes from the seeds of the flax plant. (1)

Flaxseed oil and the seeds themselves can be used in cooking. The origins have been traced back as far as Egypt, but there is debate among that as the flax plant has been found in several other countries and continents.

Flaxseed oil is sometimes confused with linseed oil. They are two separate foods and should not be interchanged for the other. While they are essentially the same thing as it is the same plant, the use of the names is different.

Flaxseed oil has garnered a lot of attention for its rich alpha linoleic acid (ALA) content. (2, 3) ALA is an omega-3 fatty acid found in seeds (chia, flaxseed), walnuts and common vegetable oils. Omega-3 fatty acids are praised for their ability to reduce risk factors for heart disease, including high cholesterol and high blood pressure. (4)

Numerous other benefits of flaxseed and the oil have been documented in Ayurvedic preparations in India. Hindus came up with Ayurveda to achieve balance through food, meditation, and treatment of illnesses with herbs along with other natural items. (5)

2. Flaxseed Oil is a Possible Breast Tumor and Cancer Fighter

Human trials have yet to be performed, but clinical trials involving rats have shown some promise for flaxseed oil. The rats, which all had tumors growing inside of them, were fed flaxseed and Tamoxifen, which is a drug commonly used in breast cancer treatment. (6)

The group of rats that were fed flaxseed saw better results in tumor reduction than the Tamoxifen group. Another group was fed both flaxseed and Tamoxifen, and the results showed that flaxseed may have had a synergistic effect on the Tamoxifen medication in inhibiting breast cancer growth. (7)

Flaxseed oil has also been studied for its appetite suppressant effects. Curbing the appetite is one of many factors that contribute to successful weight loss.

In one study, people were given a flaxseed drink, containing mostly the fiber content from flax.

The results of the study showed success when using flaxseed fiber as a dietary supplement with the flax group reporting an increased sensation of fullness and satiety compared to the control group as well as a significant decrease in energy intake. (8)

5. Flaxseed Oil May Be a Viable Form of Treatment for Obesity

A sedentary lifestyle, combined with high availability and intake of processed foods, fast foods, added sugars, etc., has increased the number of people who are now suffering from obesity. More than one third of adults are considered obese, and 1 in 20 people are considered extremely obese. (10)

Flax, when used as a dietary supplement or ingredient in other foods, shows some evidence of fighting and even preventing obesity from occurring. (11) Phytoestrogens found in soy and flaxseed could fight diabetes and obesity, according to the American Physiological Society. (12)

6. Flaxseed Oil Protects You Against Inflammation

The antioxidant effects of flaxseed oil are not limited to the cardiovascular system. Oxidative stress (which has been linked to antioxidant deficiency) and inflammation are common risk factors for a multitude of health problems not limited to insulin resistance, type 2 diabetes, metabolic syndrome, obesity and asthma. Some preliminary evidence shows that flaxseed intake may decrease the aforementioned health problems by increasing antioxidant and anti-inflammatory protection. (13)

In addition, the lignin content found in flaxseeds and flaxseed oil may protect blood vessels from inflammatory damage. Lignans inhibit the formation of platelet activating factor (PAF), thereby decreased the risk of inflammation. (14)

Although flaxseed oil has extensively researched, further study is needed. It remains to be seen whether flaxseed oil will become an effective treatment against various diseases, and whether it can replace pharmaceutical atlernatives. This type of research would mostly be beneficial in determining comparative efficacy of flaxseed oil versus other items that are reputed to have similar health benefits.

Thus far, the health benefits seem to mainly revolve around cardiovascular health, cholesterol, and inflammation as well as dieting benefits like the appetite suppressant discussed earlier.

At this time, it would seem that Ayurveda contains the most listed health benefits of flaxseed oil, but this does not count much towards established scientific study.

So far, there are proven benefits related to cardiovascular health, inflammation, dieting, constipation, fatigue, and some cancer prevention just to name a few. This is due mainly to the high fiber content and the presence of omega-3 fatty acids. Some of these have been documented in clinical human trials.

Others have been documented through rat trials, with the need for further human study. Still others have not been fully tested outside of pilot studies, but more research is sure to follow.

All in all, it would seem that supplementing with flaxseed oil is a good recommendation with the exception of pregnant and nursing women, children, and adults with certain medical conditions, pending a doctor’s consultation and subsequent approval.

As with all things, moderation is a word to keep at the forefront of your mind. Although flaxseed oil may be beneficial, there is such a thing as too much of a good thing. This saying has been proven repeatedly over time, and it rings true with most, if not all, things.