For thousands of years, people throughout the world have enjoyed the taste as well as the health benefits of various types of tea. Kombucha is not as popular as other teas, but has been consumed for at least two thousand years. Kombucha was first consumed in Asia and traveled throughout Russia and Eastern Europe in the centuries that followed. First known by the Chinese as the Immortal Health Elixir, Kombucha is a fermented, carbonated, black or green tea based beverage that when consumed regularly, has a variety of health benefits that one can attain. 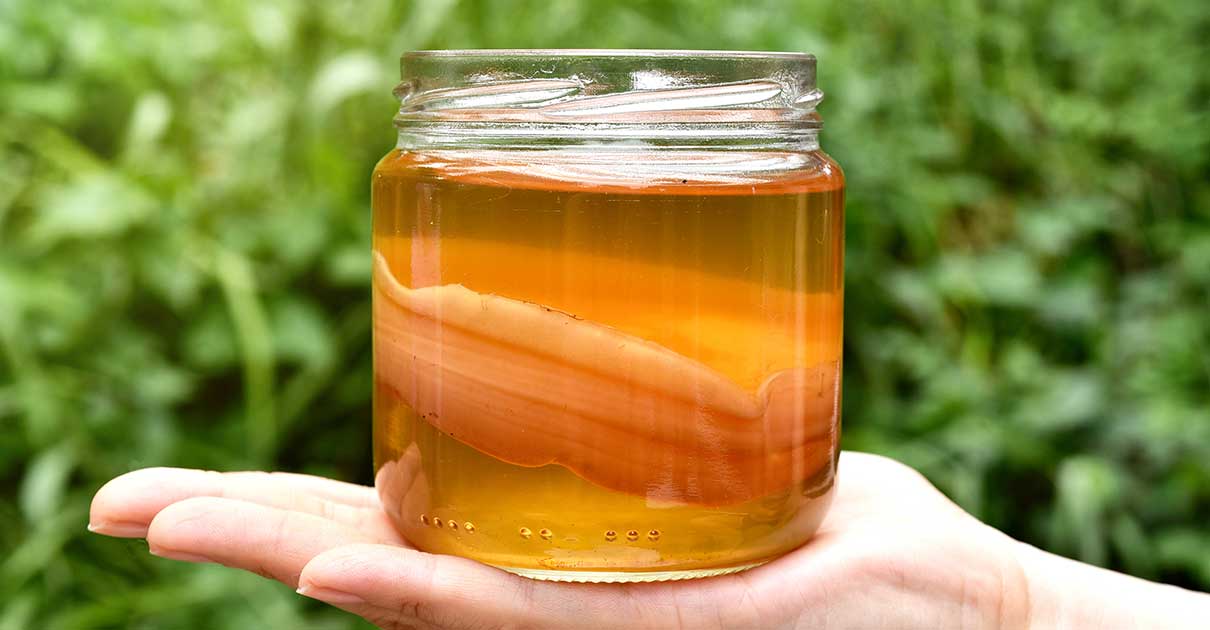 1. Kombucha is High In Antioxidants

Antioxidants are essential chemicals that are found in plants and play an incredibly important role in the prevention of many different diseases and common ailments. Antioxidants work throughout the body to eliminate bacteria and free radicals which are unstable molecules that may cause a variety of different diseases.

According to statistics from the National Cancer Institute, 1 – 2 million people in the United States are diagnosed with cancer each year. The traditional treatments for cancer such as radiation and chemotherapy may cause complications and many potentially harmful side effects.  One of the causes for cancer is a high number of free radicals present in the body.

As mentioned in the previous point, Kombucha is full of antioxidants and regular consumption is an effective way to prevent all kinds of cancer from developing in our bodies (2).

The liver is one of the most important organs in the body and plays a major role in digestion and keeps the body free of harmful toxins. Every day, the liver filters toxins in the body and helps convert nutrients we get from food into substances our bodies can use to function efficiently.

Those who enjoy drinking alcohol on a regular basis and consume grilled food, which are high in carcinogens due to the charred areas, may want to give Kombucha tea a try to help detoxify the liver.

Kombucha tea is high in Glucaric acid. Glucaric acid aids the body especially the liver in the digestion process and helps get rid of harmful toxins built up in our body over time (3). Kombucha can also help to detoxify the intestines, enhancing the natural flora and fauna, and keeping you regular.

Over one third of American adults are considered obese with another third classified as overweight. Various weight loss products promise miraculous results with very little effort but true and lasting weight loss should consist of a regular exercise regimen and a healthy diet full of fruits, vegetables, and lean proteins. However, Kombucha tea may help to maximize your weight loss efforts by giving your metabolism a boost.

Many recommend consuming Kombucha first thing in the morning to reap the weight loss benefits or an eight ounce glass prior to every meal to help the boost metabolism. Kombucha tea is high in acetic acid which aids in weight loss (4). Additionally, thanks to the detox properties of the tea,  the body is more capable of losing weight compared to when toxins are built up in the system.

As most of us know, caffeine is one of the most addictive substances in the world but it is also arguably the most popular go to source for a boost of energy. Unfortunately, caffeine can have withdrawal effects such as headaches, fatigue, and may cause harmful side effects to those who have digestive and heart related issues.

Unlike many caffeinated drinks and teas, Kombucha is not loaded with sugar that can result in energy crashes and has much less caffeine than most energy boosting drinks. As mentioned earlier, Kombucha works to detoxify the body, which means that the body can utilize energy more efficiently which will help individuals get through the day without feeling too drained at the end of it.

Additionally, during the fermentation process of making Komucha tea, iron is released through a process called chelation. Blood hemoglobin is boosted by the release of iron which helps improve the oxygen supply to various tissues in our body which helps create more energy, also known as ATP (5).

6. Kombucha Has Some of the Benefits of Green Tea

Kombucha that is made from green tea will possess some of its health benefits as well due to the polyphenols that act as powerful antioxidants in the body. (6) These antioxidants protect the body from harmful free radicals, and boost the immune system from the inside out.

In addition, green tea has also been found to have fat-burning and metabolism-boosting properties that can reduce your risk of developing metabolic diseases such as diabetes and insulin resistance. Furthermore, green tea is a natural source of caffeine, which can promote physical activity and indirectly increase caloric expenditure.

How To Make Homemade Kombucha

Kombucha tea can be found in many different health food stores, but for those who consume this beverage on a regular basis, it is much cheaper to make Kombucha tea at home.

When making Kombucha, it is essential to have a scoby. Scoby stands for symbiotic colony of bacteria and yeast, which provides many of the health benefits to Kombucha.

The other ingredients required to make Kombucha tea can already be found at home including black or green tea, filtered water, sugar, and a starter tea or vinegar. Other supplies include a glass jug and a wooden spoon.

Avoid using metal or ceramic utensils and containers as unhealthy chemicals can leach into the tea during the fermentation process.

Making homemade Kombucha may take up to 1 – 4 weeks to fully ferment, depending on room temperature. Kombucha can be flavored with fruit juices during or after the fermentation process to mask some of the strong fermented flavor.

Are There Side Effects of Regular Kombucha Consumption?

While most people can consume Kombucha without any problems, there are definitely some side effects to drinking Kombucha. The fermented content of Kombucha can cause excess gas as well as yeast infections for those who are susceptible to candida overgrowth.

Who Should Not Consume Kombucha

Kombucha has many different health benefits, but there are people who should avoid consuming this drink.

Women who are pregnant or nursing should avoid therapeutic consumption of Kombucha because of its caffeine and alcohol content. Additionally, the high levels of various nutrients are often too high for developing fetuses and newborns. Children should only be given small, diluted amounts of Kombucha tea.

Also, alcoholics should avoid Kombucha for the alcohol content and those who have problems with blood sugar levels should be careful when consuming Kombucha as it can play a role in lowering blood sugar. Those who are on blood thinning medications or are about to have a major surgery should avoid Kombucha as it can prevent the blood from clotting correctly.

Kombucha has been shown to have some effects on oral health. Since it contains natural acids, it may erode the enamel of the teeth, causing it to be weaker and more brittle. One way to circumvent the damage is to drink Kombucha through a straw, or to gargle with water immediately after consuming Kombucha to ensure that trace amounts do not linger on the teeth.

The base of Kombucha is black tea, so all Kombucha will contain some caffeine. The amount will vary depending on the steep time and type of tea used. In general, it is lower in caffeine than coffee or even soda. Its caffeine content also decreases during the fermentation process, so the longer it is fermented, the less caffeine will be left in the brew.

Tea is one of the most popular beverages in the world and comes in many different varieties. While tea has a multitude of health benefits, Kombucha tea is full of antioxidants, enzymes, and healthy bacteria that regular, unfermented tea simply may not provide. Regular consumption of Kombucha can have a variety of different health benefits throughout the entire body and is a great way to start your day.