Mushrooms are the fleshy, spore-bearing and fruiting part of fungi. They normally emerge above ground, either on soil or on a food source. They are also referred to as toadstools in certain countries. In terms of appearance, all mushrooms are generally associated with the white button mushroom and is characterized by species of fungi that have a stem (stipe), cap (pileus) and gills (lamellae) underneath the cap. These gills are actually responsible for producing spores, and in turn, the spores support the proliferation of the fungus across its area of occupancy. (1) 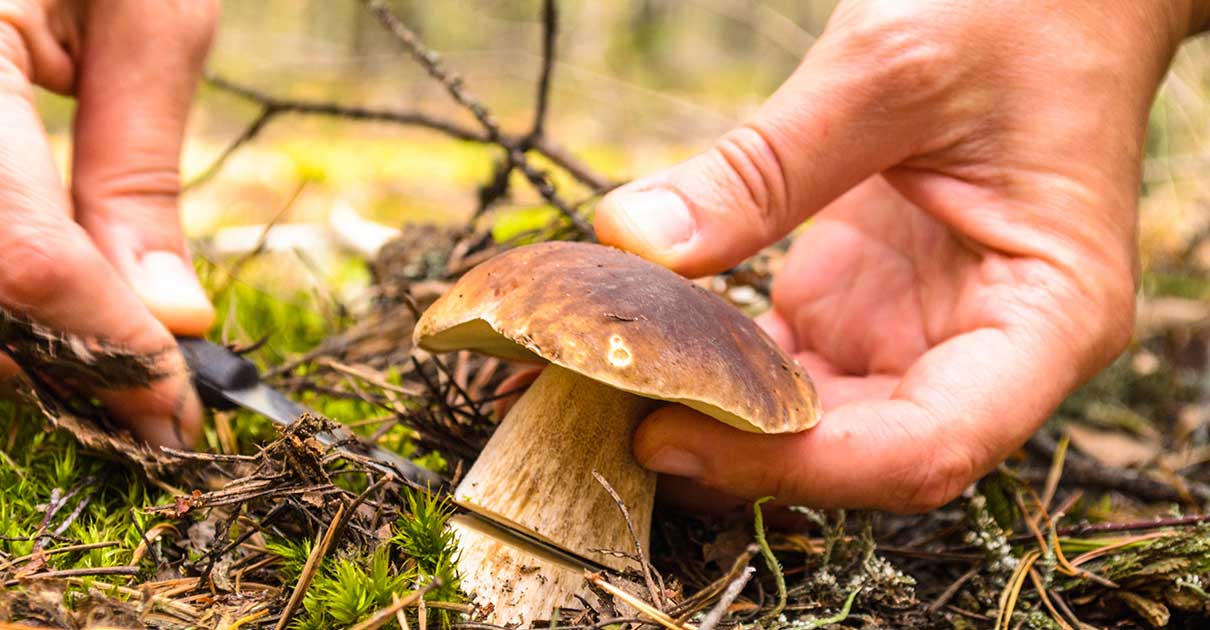 Many species of mushrooms are a valuable source of selenium, a mineral that is beneficial for the bladder, in addition to vitamin D. (2) Hence, it is easy to understand why ancient Egyptians believed that mushrooms are a food fit for the royals and why the Romans thought that mushrooms gave strength to warriors.

There are 300 known edible species of mushrooms, 10 of which are being grown commercially. (3)

1. Mushrooms May Have Anti-Cancer Properties

According to a tissue culture study published in 2010’s November issue of the Experimental Biology and Medicine journal, white button mushrooms as well as other types of common and specialty mushrooms accounted for a significant lowering of breast cancer cell growth and proliferation. (4) However, further research is required to confirm the validity of these findings.

Due to their fiber-rich content, especially chitin and beta-glucan, mushrooms can help reduce blood bad cholesterol levels thereby improving cardiovascular health. A study performed on laboratory animals, the results of which were published in the International Journal of Medicinal Mushrooms in 2012, suggests that pink oyster mushrooms decrease total cholesterol, triglycerides and low-density lipoprotein (LDL) and impede arterial plaque formation. (5) However, to ascertain the benefits to human health, additional studies are needed. Researchers are hopeful though, as critadenine, a compound found in shitake mushrooms was found to enhance the liver’s capacity to process cholesterol.

3. Mushrooms Promote Liver and Pancreas Health and May Benefit Diabetics

Mushrooms are also a good source of natural insulin and enzymes, which makes these veggies the ideal food for diabetics. The enzymes in mushrooms break down the sugar and starch in certain foods, thereby helping reduce cholesterol levels. They are also rich in certain compounds that promote liver and pancreas health as well as boost the functions of other endocrine glands. In this way they support the formation of insulin naturally in the body and keep it in check. Moreover, the natural antibiotics found in mushrooms have the ability to protect diabetic patients against any infections or potentially fatal complications. (6)

Mushrooms were found to be a lavish source of calcium, a nutrient playing a crucial role in the formation and strengthening of bone tissue. A calcium-balanced diet can reduce the risks of developing osteoporosis and alleviate joint pain, as well as improve bone degenerative symptoms, such as mobility loss. A 100-gram serving of mushrooms contains approximately 2 mg of calcium, the most abundant mineral in the body. (7)

Vitamin D is generally atypical to vegetables, however, mushrooms have plenty of it. This nutrient is known to enable absorption and metabolism of calcium and phosphorous. These two nutrients are also found in mushrooms, which is why taking advantage of the combined effects of all these elements in one potent source, makes mushrooms a good choice for health meals. Mushrooms are one of the few plant sources that contain ergosterol, which is a precursor to vitamin D2. Moreover, the amount of vitamin D2 in mushrooms can be increased with exposure to ultraviolet light. (8)

Not only do mushrooms contain vitamins and minerals, but they are also a potent source of ergothioneine, a strong antioxidant, which proved extremely efficient in preventing free radicals and boosting the immune system function. (9) Ergothioneine is an amino acid that helps improve sulfur levels in individuals that have sulfur deficiency. This compound also supports elimination of free radicals, thereby promoting better health.

The antibiotic-rich content of mushrooms (penicillin is also extracted from them) curbs microbial growth and prevents fungal infections. The potent combination of vitamins A, C and B-Complex found in mushrooms makes these veggies a powerful immunity booster.

Scientific studies of different kinds of mushrooms, among which shitake and maitake were included, indicate that they are also rich in potassium. Acting as a vasodilator, potassium relaxes tension in blood vessels and thereby reduces blood pressure. High blood pressure is generally associated with life-threatening conditions like heart attack and stroke. Potassium also improves cognitive function, because blood and oxygen get to the brain in larger quantities thus stimulating neural activity. A number of studies have also shown that higher levels of potassium enhance memory and knowledge retention. (10)

8. Mushrooms Contain an Abundance of Minerals

Minerals are essential nutrients for the human body and can be found in mushrooms.

Copper, for example, helps maintain bones and nerves healthy. It also drives the reproduction of red blood cells, which are responsible for carrying oxygen throughout the body. (11)

Selenium is another important mineral that the human body needs to be in good health. Naturally this mineral is found in proteins of animal origin. However, due to their inclusion in the class of fungi feeding off animal and plant matter, mushrooms are the best source vegetarian can get the amount of selenium that their body needs. Selenium is known to strengthen bone tissue, hair and nails. Additionally, this nutrient acts as a powerful antioxidant combating free radicals.

The calcium in mushrooms helps the body absorb the iron in food, which is also plentifully found in these vegetables. Iron boosts red blood cells, thereby preventing anemia. (12)

Surprisingly, if you are overweight mushrooms help you lose weight and even build muscle. In general, fats are burnt by our bodies in the protein digestion process. This process is accelerated when proteins are combined with smaller amounts of carbohydrates, no fat and sufficient fiber. Mushrooms provide exactly this ideal nutritional combo that keeps the body fed and support weight loss at the same time. With a higher nutrient density than most of the fruits and vegetables we consume, mushrooms qualify among the three foods that we can eat as often as possible and expect no side effects, researchers say.

Participants in one dietary study were asked to change their menu replacing red meat with white cap mushrooms. The findings were crucial. Not only did the subjects lost weight over a given period of time, but they were also able to maintain their weight rather than quickly doubling the pounds they managed to lose as it usually happens with crash diets.

Despite the many benefits they have, mushrooms can be very harmful to health in some cases. Special attention must be paid to non-edible species, which strikingly resemble their edible counterparts. Therefore, if you do not possess specific knowledge and were not trained to differentiate edible species of mushrooms from the inedible variety, it is best you do not even attempt to pick them.

Because of their unique ability to absorb the material they grow on, which in some cases may be bad rather than good, mushrooms have the incredible power to either nourish or harm. Many of the species that grow in the wild contain heavy metals and water pollutants, which are highly damaging to one’s health.

To avoid any undesired consequences, it is best to stay away from ambulant vendors and stick to sealed products that you can find in the supermarket. Many species can cause negative side effects such as nausea, vomiting, convulsions, cramps, even insanity or death. Colorful mushroom species are highly poisonous.

If acquired from a certified source, mushrooms can be highly beneficial and boost your immune system, help you lose weight while supplying the amount of nutrients that your body needs to function properly. Consumed raw in salads, they add oodles of texture and flavor to any dish.