It is estimated that quinoa was first domesticated between five and seven thousand years ago by the indigenous people of modern-day Peru and Bolivia. By the time that the Western Hemisphere was colonized by European explorers and settlers, quinoa had become a staple grain throughout South and Central America. Native to the Andes Mountains, quinoa is a plant that is cultivated mainly for its edible and incredibly nutritious seeds. 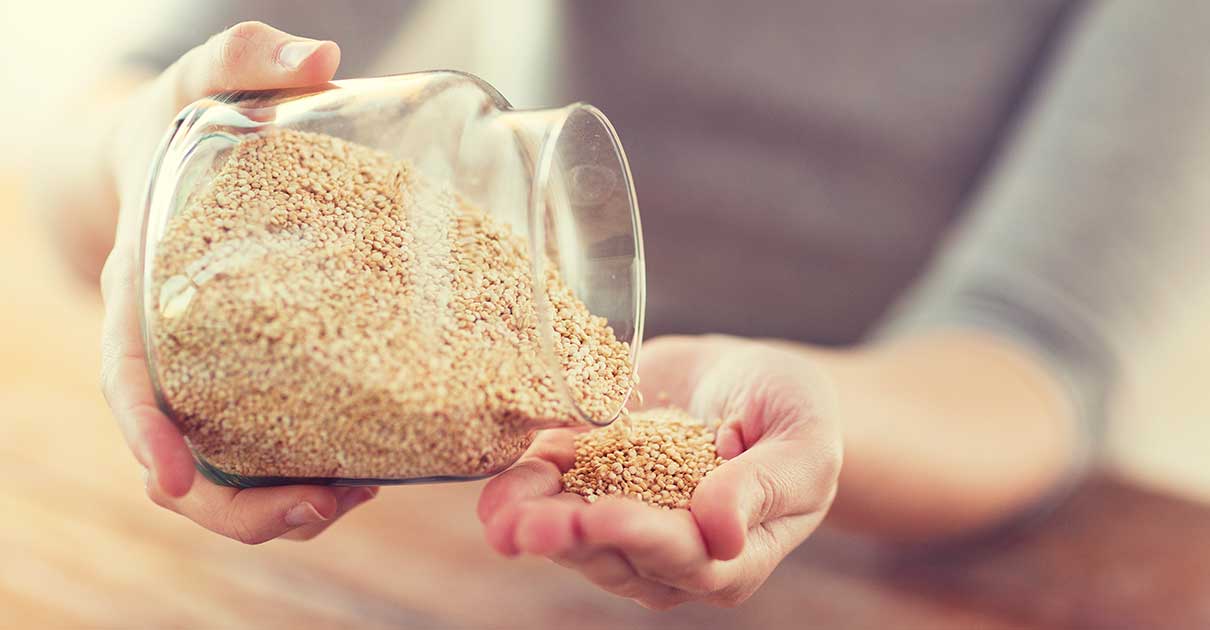 Today, quinoa is popular throughout the entire world and has a variety of different health benefits associated with regular consumption.

Like many other edible plant matter, quinoa is an excellent source of natural antioxidant compounds, particularly those of the free-soluble antioxidant fraction. (1) Antioxidants are incredibly important chemicals that work to fight free radicals, or unstable oxygen molecules throughout the entire body.

Free radicals accumulate when the body is exposed to harmful toxins, such as radiation, but also form as a natural process in the body. Free radicals do not pose a threat to your health until they start to build up, where they can alter DNA, causing aging and impaired healthy cell regrowth and can cause diseases such as heart disease and cancer.

Antioxidants work to kill cancer cells and promote new cell growth, helping to fight various diseases and aging. Quinoa is much higher in antioxidants than other grains such as wheat, corn, and rice, making it unique among cereals and pseudo-cereals, making it a great addition to anyone’s diet.

2. Quinoa is High In Dietary Fiber and Promotes Healthy Digestion

In a one cup serving of quinoa, there is over twenty percent of the recommended daily amount of fiber. (2) Quinoa also has twice the amount of fiber than most grains.

Fiber is incredibly important for a healthy digestive system. While fiber cannot be digested on its own, soluble fiber helps give bulk to waste in the intestines. Fiber also plays a role in lowering high blood pressure and high cholesterol, which when left untreated, increases the risk of heart disease, heart attack, stroke, and obesity.

Gluten is a protein that is found in wheat and many grains. In recent years, gluten free foods have become incredibly popular, with many people touting the benefits of removing gluten from their diets.

While there is no definitive evidence that removing gluten from the diet of a healthy individual will be beneficial, proponents of this diet plan claim that cutting out gluten can increase energy, help with weight loss, and can help lower cholesterol.

However, for the one percent of Americans who are suffering from Celiac disease, going gluten free is not a popular diet trend, but a necessity. (3) Celiac Disease is an autoimmune disease in which the immune system attacks the small intestine when gluten is present in the body, resulting in a wide variety of different ailments, but the most common ailments include chronic diarrhea or constipation, weight loss, loss of appetite and energy, mental illnesses such as anxiety, depression, and ADHD, and anemia.

For those who are suffering from Celiac Disease, quinoa can be an excellent alternative to traditional wheat based products.

Millions of Americans are considered to be diabetic or pre-diabetic, and with the rise in obesity in the United States, many of those who are recently diagnosed are suffering from type two diabetes.

Diabetes occurs when the body cannot regulate blood sugar levels because there is not enough insulin produced or the body resists the insulin produced. Diabetes is a serious illness that needs to be treated with the supervision of a doctor or medical provider.

5. Quinoa May Help With Weight Loss

In the United States, two-thirds of adults and one third of children are considered to be overweight or obese. Weight loss and healthy weight management can be difficult to achieve without incorporating a regular workout routine and a healthy diet high in whole grains, fruits, vegetables, and lean proteins (5).

Quinoa is an excellent addition when trying to lose weight. Quinoa helps to stabilize blood sugar levels, which can help to aid in weight loss. The high levels of fiber in quinoa also helps to keep you feeling full longer without adding a significant amount of calories.

Additionally, quinoa is a fantastic source of protein, which can help with weight loss efforts and building lean muscle.

6. Quinoa is a Plant-Based Complete Protein

Protein is an especially important part of your daily diet, as it plays an important role throughout the body in cell growth of muscles and organs, and also helps build neurotransmitters and hormones. Without adequate protein, these functions in the body do not work efficiently.

Quinoa is what is known as a complete protein, which means it provides the amino acids that the body is unable to produce on its own. Quinoa is one of the only plant based foods that is a complete protein making it ideal for those who are limiting meat for health related reasons or follow a vegetarian or vegan diet (6).

For those looking for a balanced diet, quinoa is an excellent addition (7).

This grain is high in iron, which helps produce red blood cells, as well as magnesium, which plays a role in helping the body fully utilize other nutrients and vitamins.

In a study conducted at the University of Milan, researchers found that out of the various gluten-free foods compared based on their digestibility, quinoa was a clear standout in lowering free fatty acid levels as well as other triglyceride concentrations in healthy volunteers. (8)

How to Prepare Quinoa

Similar to rice, quinoa can be boiled or steamed using a regular pot or rice cooker. Use a ratio of 2 parts water to 1 part quinoa with a pinch of salt and a teaspoon of olive oil.

Soft, fragrant quinoa can be incorporated into your diet in so many ways. Use it in salads and entrees, or add it to baked goods.

Quinoa has been an important addition to the diets of those in Central and South America for thousands of years. This grain is a smart choice to add into your diet for numerous reasons. Quinoa is relatively simple to make, with hundreds of recipes available online. Quinoa is a versatile flavor that can be added to a number of different dishes for an extra nutritional punch with few added calories.