As the taste and quality of commercial soy milk continues to improve, people are drinking it more and more for their personal fulfillment. However, many individuals have soy milk because of its added health benefits. So what exactly are the benefits of drinking soy milk, when compared to the more traditional cow’s milk? The health benefits of soy milk include decreasing the risk of cholesterol, obesity and cancer. It also aids in boosting cardiovascular health and decreasing the risk of various postmenopausal issues. Furthermore, the protein content of soy milk qualifies it as a helpful supplement for those on a plant based diet. 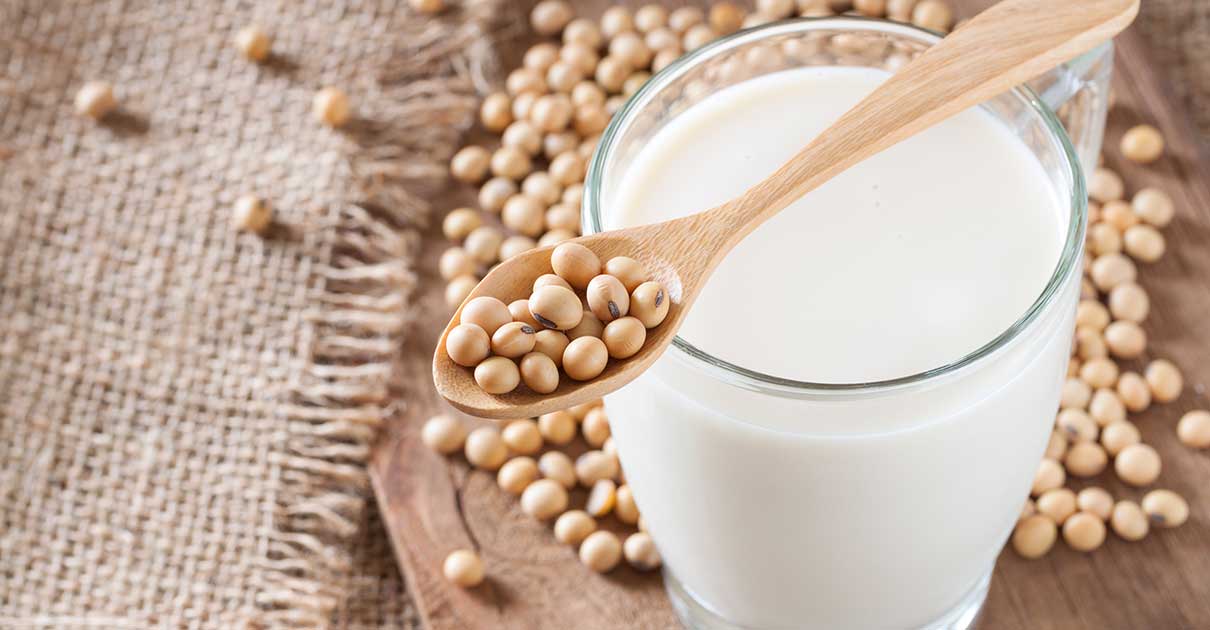 The soy milk raw product, soy beans, are a legume from which a variety of food products are created for human consumption. Soy products are preferred among those on a vegetarian diet due to the elevated protein levels of the soybean. Soy milk, along with other soy products, has been a standard part of Asian cooking and cuisines. It is also used to make tofu. The use of soy milk is thought of to have originated in China during ancient times. It is used quite a lot in other Asian countries like Japan, the Philippines and Malaysia. Today it is used all over the globe and is quite obtainable in many varieties in various regions.

Soy milk is preferred by many because of its flexibility and capacity to be used as a milk substitute in recipes. It comes in many flavors which include chocolate and vanilla. Some people even drink salted soy milk in countries like India and China.

Soy products substitute a myriad of meat dishes and are a healthy replacement for those who are lactose intolerant. Due to its cost efficiency, soy products are gaining popularity around the globe, and studies are starting to examine the numerous other health benefits of having this natural plant product in our diet.

1. Soy milk is packed with a broad spectrum of nutrients.

Unfortified original soy milk is an excellent dietary source for sugar, dietary fiber, energy, protein, and fat. The minerals it contains include iron, magnesium, phosphorus, calcium, potassium, sodium in addition to zinc. Many vitamins like folic acid, riboflavin, niacin, thiamine, vitamin B6, B-12, vitamin D, vitamin E and K are also present in soy milk. It also has saturated, monounsaturated and polyunsaturated fatty acids. The combination of all these nutrients help in preserving good health. (1)

Soy milk’s nutritional value may also depend on as to whether it is fortified or not. The protein levels in soy milk is similar to that of cow’s milk. Other nutrients could be of less amounts, hence fortification of minerals as well as vitamins is typically done in commercially available soy milk products.

Most fortified soy milk suffices as a nutritious milk replacement, especially for those on a plant based diet, or those with dairy allergies. The protein levels and the soy isoflavones that are found in the majority soy products are phytonutrients which contain various precautionary medicinal benefits and are in both fortified and non-fortified soy milk versions.

Examining the nutritional label is always a prudent thing to do to determine the nutritional value of every soy milk product. Here are some known health benefits of soy milk.

2. Soy milk is an excellent weight loss aid and a good source of plant-based protein.

The most effective way to manage weight is by regular exercise and proper nutrition. More often than not, those who train with weights consume large amount of animal protein to build muscle and to recover. Unfortunately, the excessive consumption of animal protein has been linked to higher blood pressure, high cholesterol, and other unwanted ailments. A diet high in animal as well as dairy protein has also been linked to a raised risk for osteoporosis.

Out of all the plant based proteins, soy milk has one of the highest complete protein contents. (2) Vegetable proteins are often a healthier source of protein since they cause less filtering of calcium through the kidneys.

3. Soy milk has no lactose.

For those who are lactose intolerant, consuming dairy products may cause many negative effects on the body including bloating and swelling in the abdominal region due to gas, cramping and pain, nausea and vomiting, acne, headaches, and diarrhea. (3)

Negative reactions and symptoms to lactose intolerance can range from as little as 20 minutes post consumption of dairy, to up to 2 days. The uncertainty of when symptoms may start can be extremely inconvenient for some and put them in uncomfortable situations.

Fortunately, soy milk is lactose free and can actually help treat diarrhea. (4) As an added bonus, soy milk has the prebiotic sugars stachyose and raffinose. These prebiotic sugars enhances the immune system and helps reduce toxic substances in the body.

Soy milk is a good substitute for those who are allergic to cow’s milk. Milk is a very common allergy especially among children. The negative symptoms associated with milk include vomiting, rashes and hives, gastrointestinal upset, bloody stool (more common to infants), and in severe cases, anaphylaxis which can cause the body to go into shock, impair breathing, and even cause death. (5)

In the United States alone, about 73.5 million people suffer from high low-density lipoprotein (LDL) cholesterol and few people have the ability to keep their condition at stable levels. (7) With the rate of high cholesterol rising, it’s alarming that less than half of those diagnosed are receiving treatment. The risk of heart disease is twice as high for people suffering from high cholesterol not to mention other diseases affiliated with the condition.

Soy protein on the other hand can lower cholesterol levels. (8) The Food and Drug Administration or FDA of America says that soy protein, when part of a diet low in cholesterol and saturated fat, could considerably lessen the odds of coronary heart disease. The FDA’s recommendation is to integrate 25 grams of soy protein into your daily meals. Additionally, studies show that those with elevated cholesterol levels receive the greatest benefit from consuming soy milk. (9)

6. Soy milk is devoid of hormones.

Cow’s milk is replete with natural hormones passed to it from the cow, but it also has synthetic hormones, which can affect the body negatively. (10) Insulin-like growth factor-1 (IGF-1) is a hormone found in cow’s milk and can cause certain types of cancers such as breast and prostate cancer.

It’s important that those who have a family history of certain illnesses should avoid the consumption of milk due to the risk being higher and replace it with soy milk since it is devoid of these hormones.

7. Soy milk does not cause insulin dependent diabetes.

According to the Centers for Disease Control and Prevention (CDC), the United States has 29.1 million cases for diabetes. Diabetes is one of the leading causes for death and being diagnosed with it calls for significant lifestyle changes including paying closer attention to your diet.

While no common consensus exists in the science community, some research has indicated a connection between consuming cow’s milk early in life and the development of insulin dependent diabetes. This link is absent with soy milk. (11)

8. Soy milk is abundant with isoflavones.

Cow’s milk is devoid of isoflavones. Isoflavones have a myriad of health benefits such as bringing down cholesterol, mitigation of menopause symptoms, prevention of osteoporosis and the lessening of risks for some cancers, particularly breast and prostate cancer.

Reports of these cancers are few in countries with high intake of soy products, which includes soy milk. Isoflavones are actually antioxidants that shield cells as well as DNA from oxidation.

In summary, soy milk has lots of phytonutrients that possess preventive powers against numerous chronic illnesses. These phytonutrients have been observed to be beneficial to health for all individuals, especially for the aging population.

Soy milk protein content can be sufficient when significant quantities are taken especially for those who opt for a plant based diet. Furthermore, soy milk is now frequently fortified with vitamins and minerals like calcium, making it a good substitute to cow’s milk.

Soy isoflavones present in soy milk have also been observed to have many benefits. Due to the natural phytoestrogens found in the product, menopausal individuals appear to get the most benefit when drinking soy milk as part of their regular diet. Soy isoflavones perform synergistically as a preventive compound for improving cardiovascular risk due to its ability to lower LDL-Cholesterol.

Studies consistently show that soy milk is a good choice especially for those who opt for a plant based diet.