Running is one of the most popular cardiovascular workouts in the world, with over eighteen million finishers in twenty-eight thousand public running events in the United States alone. Besides a decent pair of shoes and weather appropriate clothes, running does not require any expensive equipment or accessories as other popular workout trends do. Running has also stood the test of time, and for decades has been a favorite of many people who are trying to be more healthy and avoid a sedentary lifestyle. 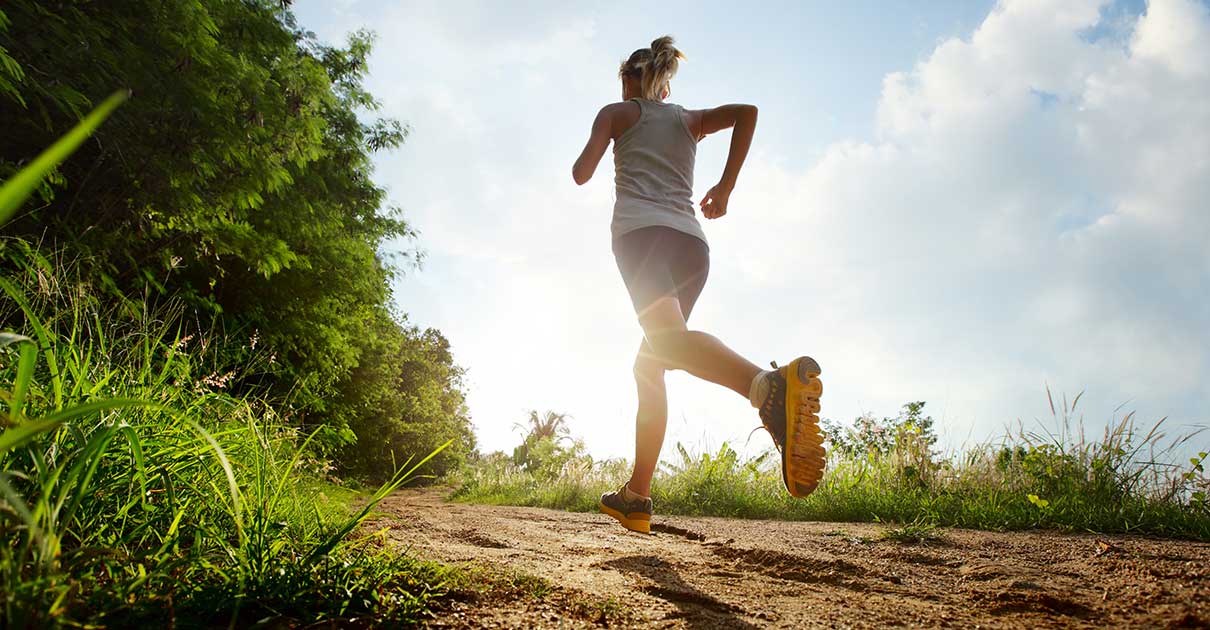 While many people see running as a way to keep the physical body healthy, it is also a great way to increase your mental and emotional wellbeing. With more people running than ever, now is a good time to find a running buddy and start to reap the benefits of running for yourself.

As any doctor will attest to, running or other exercise to increase your activity daily is a good thing. (1)

Running will help to keep the heart muscle healthy and lower LDL, or “bad cholesterol”, which clogs veins and arteries, therefore lowering risk of heart attack and stroke.

The Center for Disease Control Suggests getting at least one hundred and fifty minutes a week, or a little over twenty minutes per day, of moderate aerobic exercise.

However, it should be noted that before starting any kind of long-term workout regimen, you should discuss your plans with your doctor. While it can be rare, there are instances of those with underlying heart condition being exacerbated by running, particularly long distance running. (2)

A trip to the doctor will also help to ensure other systems in your body are healthy enough for regularly running.

2. Running Can Boost Your Immune System

As with cardiovascular health and running, there is a sweet spot to increasing the immune system without going overboard. (3)

Those who run the recommended one hundred and fifty minutes per week as outlined by the CDC see an increased immune response. Running can help to rid your respiratory tract, therefore fighting off colds and the flu. It can also increase white blood cells, which help fight illnesses throughout the entire body.

However, as many marathon runners can attest to, it is not uncommon to come down with a minor cold or sore throat before or right after a big race. (4) This is due to the fact that these long distance runs can increase the levels of stress hormones in your body, which in turn make it harder to fight off infections.

This phenomenon can potentially be offset by getting enough sleep at night as well as eating a balanced diet, particularly high in Vitamin C.

3. Running Can Reduce Your Risk of Cancer

Cancer is one of the scariest diagnoses that a person can receive, and is regularly one of the top two leading causes of death for those under the age of 85.

There are studies support men who run having a lower incidence of colon polyps and colon cancer. (5)

Even though exercising when going through chemotherapy seems like the last thing you might want to do, other studies have shown that women who have already been diagnosed with cancer enjoy lower risks of mortality than walkers and non-exercising women. (6)

Of course, running contributes to an overall healthy body and mind, which can help stop the formation of cancer throughout the entire body.

4. Running Is A Great Way to Lose Weight and Build Muscle

For someone who is looking to lose fat and build muscle, running is a great choice. (7)

While you will start to see small results right away, any long term weight loss plan should understand that running will have to be a regular habit rather than a quick way to lose a couple of pounds.

Runners can see weight loss in the beginning after regularly running for 20 minutes a day, but after a while, will not see results. Longer runs including interval training will be necessary to continue to lose weight.

It is also important to remember that running will also build muscle, which weights the same as fat, but takes up less space so you will appear smaller if you have more muscle than fat on your body. If you are plateauing in your weight loss goals, switch up your running routine.

5. Running Can Help Manage Diabetes and Reduce Risk of Onset

Diabetes, particularly type 2, is a disease that is quickly affecting more and more people as obesity is also on the rise. Losing weight plays a huge role in preventing type 2 diabetes from occurring.

However, after you have developed diabetes, there is no cure for this disease. There are, however, ways to control the dependence you might have to insulin.

A healthy diet full of fruit and vegetables, healthy fats such as olive oil, and lean protein are key to managing diabetes, as well as regularly running and exercising in other ways. (8)

Everyone has heard of the term runner’s high, but what exactly is this phenomenon?

Endorphins are released during exercise, and are a natural painkiller that the body produces when it is physically uncomfortable. By pushing yourself a little bit outside of your comfort zone, your endorphins kick in and start easing the discomfort. (9)

Interestingly enough, there is also a substance called endocannabinoids that the body produces when under short term stress. These substances is similar to the cannabinoids in THC that produce marijuana’s high. Getting nervous before a race as well as mental stress during the race can set off the production of this substance, and both endorphins and endocannabinoids work together to produce the runner’s high.

Not everyone gets this high sensation every time they run. However, there is no doubt after a satisfying run, you will sit down on your couch feeling tired, but accomplished.

7. Running Can Help With Serious Depression and Anxiety

Depression and anxiety are two huge concerns that are affecting millions of Americans every year. These two mental illnesses can affect anyone at any time in their lives and the exact causes of either of these conditions may never be truly understood.

Additionally, for some people, major life changes need to be made in order to fully begin to treat clinical depression and anxiety, and running is only one part of that treatment plan.

However, there are a couple of different reasons that running can help with depression and anxiety. The first is that it releases endorphins, as discussed earlier. These chemicals can help, even temporarily, to boost your mood. (10)

Running with a workout buddy can also ensure you get out of your house and have social interaction, which can be hard for those who are suffering from depression but is beneficial in the long run.

8.Running Can Help Those With PTSD

Post-Traumatic Stress Disorder (PTSD) is a condition that is on the rise among both veterans and civilians alike. This disorder occurs after someone has experienced a particularly startling, scary, or dangerous event, such as a sexual assault, witnessing a grave injury, or being in a battle zone.

The body has natural ways of dealing with these issues, but PTSD occurs when there are symptoms lasting for more than a month and they are interfering with the person’s work performance and personal relationships.

A recent study showed that those who suffer from PTSD have lower levels of brain-derived neurotrophic factor, which is a protein found in the brain that helps it recover from stressors and traumatic events. Running helped to increase these levels, which in turn lowered the occurrence of PTSD symptoms. (11)

There is no doubt about it; when you finish a big race or beat your personal best time, your confidence goes through the roof and you get a boost in your self esteem.

Those who are also running to get healthier or lose weight may notice results quickly which an effective running program, which will also do wonders to help them feel good about their progress. There are many afterschool programs that promote the benefits of running in youth, which helps to set up healthy habits for life.

It is hard to find a family in the United States that has not been affected by the debilitating disease that is Alzheimer’s, which affects the person’s ability to think and reason, and profoundly impacts memory. While no one is fully sure what causes Alzheimer’s and dementia, there are some clear ways to prevent this illness or lessen the severity of it as you are reaching old age.

Of course, a healthy diet is important to preventing most ailments and age related illnesses. However, studies have also reported a decrease in the brain of tau protein, which is thought to play a role in the development of Alzheimer’s, in people who are getting at least two hours of cardio workouts a week, even if they have already started to develop memory loss and early stages of Alzheimer’s. (12) The study found that the best results were found in those who were combining healthy eating with exercise. Researchers were shocked by these findings, as no currently prescribed medication has been able to produce close to these results.

11. Running Can Help Those Suffering From Addictions

Drug and alcohol addictions are very common mental illnesses that many people face. When recovering from an addiction, it is important to have a strong treatment plan to avoid relapse.

Running is a great addition to any treatment plan as it forms healthier habits and helps to undo the damage done to the body and brain caused by toxic drugs and long-term alcohol use. (13)

Since it also a very social form of exercise, it can help the recovering addict form strong social bonds that are separate from those connected to the addiction. Running can also help with any low self-esteem or depression that led to drug use in the first place.

12. Runners Tend to be More Accomplished At Work

Running is a great way to begin or end your day decompress and de-stress from work-related stress. This allows people to think about the task at hand while they are at work. (14) Running also allows you to break down tasks and accomplish both short term and long term goals at the office. Running can also help increase your energy, therefore decreasing your dependence on coffee.

Most people can’t get off the couch and start running a 5K immediately, start with a combination of running and walking until your body gets used to the increased movement, and then start increasing your time and distance. Find a workout buddy who will keep you accountable, as well as keep you company on your runs.