Is Gluten Really Bad for You?

Going gluten free has been all the rage in the world of health and nutrition lately, and there is a lot to be said for eliminating from your diet. In fact, one study found that one third of Americans are trying to be gluten free (1). However, there are a wide range of gluten sensitivities and allergies that could be present, along with a wide range of reasons you might consider going gluten free. It’s important first to really understand what gluten is, and what benefits could be reaped by avoiding it. 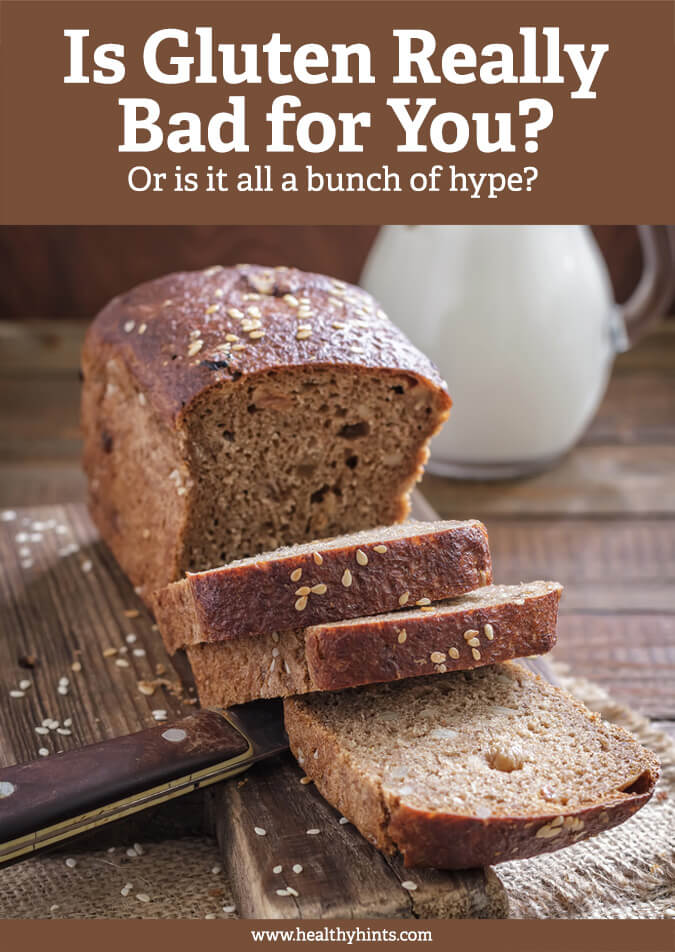 Gluten is the protein in wheat and other glutenous grains, which include spelt, rye, barley and oats (unless certified gluten free). You can think of gluten as the component of bread products and baked goods that gives it that fluffy, sticky texture. Because it is an excellent binding agent, it is also used in many other processed food products such as ice cream, soy sauce, condiments, and even in non-food items such as personal hygiene products and shampoo.

This means that if you are gluten free, some serious detective work is in order to know all of the products you’ll need to avoid (see a complete list of gluten containing foods here).

Celiac disease (CD) is an autoimmune condition that is the most extreme form of gluten sensitivity, and is a full blown allergy. CD is a serious condition that evoke major reactions to even the tiniest amount of gluten, or even foods that have been prepared in the vicinity of gluten. Furthermore, CD goes undiagnosed in up to 80% of sufferers (2), largely due to the fact that symptoms are often not ones you might relate to a GI related disease, and there is little education among the conventional medical community in diagnosing. 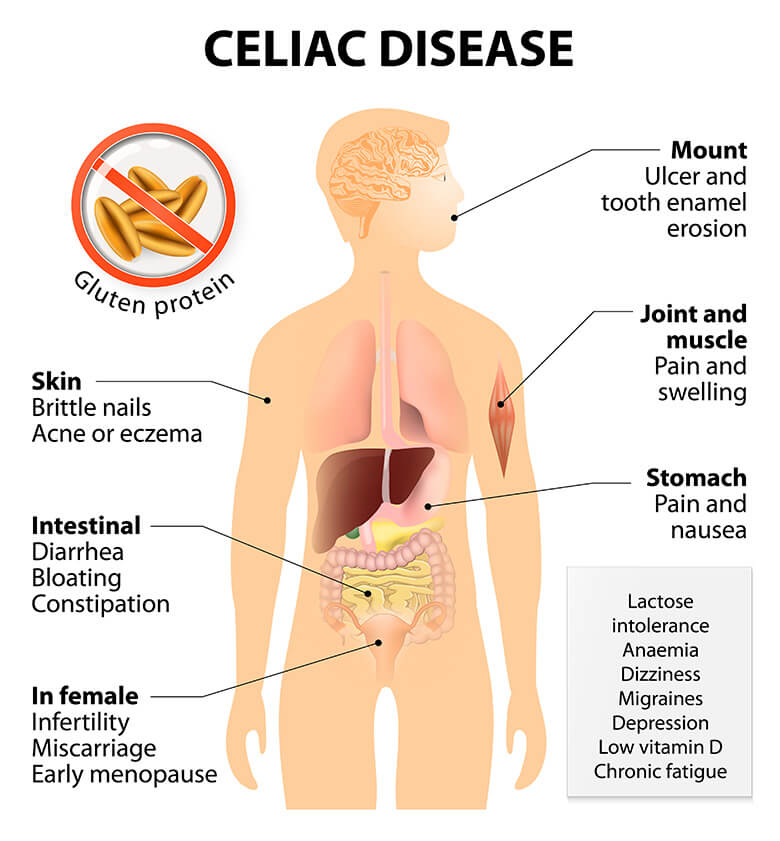 Symptoms of CD might include anemia, fatigue, other autoimmune conditions and even risk of death (3).

However, you don’t need to have full blown CD to experience problems from eating gluten, or to benefit from going gluten free.

A much more common condition than Celiac Disease is gluten sensitivity, which can also cause a host of problems. Symptoms from sensitivities or intolerances to gluten (two words used interchangeably) really vary person to person, so there is no clear cut definition, it simply means that you react poorly to gluten. Common symptoms might include the following: 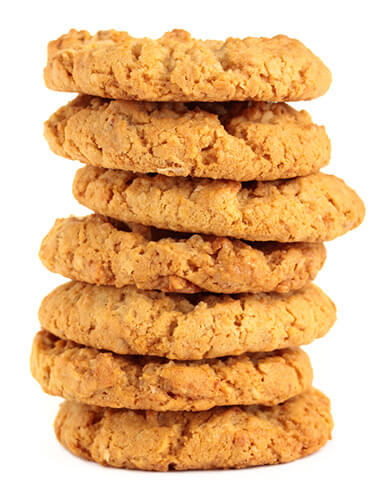 Symptoms are similar to those of CD in many cases, although there is no autoimmune response present (the body attacking its own tissues). While this is a difficult issue to study due to the huge range of symptomology, one study suggested that 8% of the population is affected by gluten sensitivity (4), compared to about 1-2% of the population that suffers from CD.

So Why Does Gluten Cause So Many Problems? 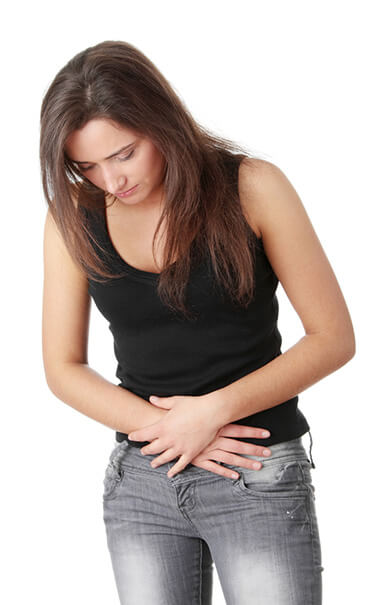 The primary phenomenon at the root cause of many conditions connected to gluten is called leaky gut syndrome (otherwise known as increased intestinal permeability). When a sensitivity or allergy to gluten is present (and even sometimes if no sensitivity exists), the lining of the gut becomes damaged over time (5), meaning that toxins and molecules pass through the bloodstream that should not be allowed to enter.

But, since the gut lining has been damaged, these molecules are allowed to pass through, and the immune system launches an attack. This creates generalized inflammation, which is a major contributor to the health conditions mentioned above, as well as hormonal imbalances and weight loss resistance (the inability to lose weight).

Studies have shown that gluten can contribute to GI symptoms in all individuals (regardless of if an actual allergy or sensitivity is present), and another study shows that there is a good possibility that gluten is connected to certain neurological disorders (6). Gluten allergies have also been connected with various autoimmune diseases (7), so if you suffer from one yourself, cutting out gluten should be top priority.

Another important point to consider is that one of the reasons gluten sensitivities/allergies have been on the rise in recent years is due to the way we process grains in western society. Many gluten containing foods today are higher in the gluten protein, and also stripped of other nutrients that our bodies requires to effectively break-down and assimilate gluten (8), such as fiber and important enzymes necessary for digestion.

The good news for those with CD or sensitivities, is that if a gluten related condition is caught early enough, negative effects can be largely reversed by cutting gluten out of the diet and healing the gut.

There are several important factors to consider when adopting a gluten free diet, especially if major symptoms are present that get in the way of your daily life.

A Gluten Free Diet Does Not Equal a Healthy Diet

The major misconception that eating gluten free automatically means eating healthy is being pushed by the gluten free food industry these days, and it is a dangerous one. While gluten is a major irritant that promotes inflammation in many people, simply going gluten free does not equal a healthy diet, and might not clear up symptoms in and of itself.

Due to the gluten free trend in recent years, many food manufacturers have duped consumers into believing that their gluten free packaged foods are healthy. The truth is, most gluten free products (aka, foods that are not naturally gluten free, such as veggies, meat, etc), usually contain the same harmful ingredients as any other packaged foods, like artificial colorings and flavorings, binders and chemical agents.

To healthfully go gluten free, it is key to focus your diet on foods that naturally do not contain gluten, such as high quality meats, eggs, fish, fruits, vegetables, and healthy fats like avocados, olive, coconut and flax oils, ghee, grass-fed butter and nuts and seeds. Gluten free grains might be fine for some people, too, which include rice, quinoa, amaranth, buckwheat, corn, millet, sorghum, teff and certified gluten free oats.

You Might Need to Eliminate All Grains for Awhile

If you find that you are sensitive to gluten but symptoms persist, you might find that going completely grain-free for a period of time is what helps to clear up your condition(s). Many non-glutenous grains have similar molecular structures to gluten, and also increase intestinal permeability and inflammation in sensitive individuals.

Remember, other foods that are equally as inflammatory include refined carbohydrates and sugars.

In conclusion, gluten sensitivity can be a primary cause of common symptoms, and cutting it out (at least for a time) can prove beneficial. Another bonus is that when you eliminate gluten from the diet (as long as you stick with naturally gluten free foods) you will be, by default, be cutting out most refined carbohydrates, which are a leading cause of weight gain (9). And even if you find that a little bit of gluten doesn’t cause any problems, remember that it is an inflammatory food, so eating it in moderation is key.

(Rad this next: Is Coffee Bad for You?)