Oatmeal is a food most of us have grown up eating. Whether it be a warm bowl of porridge or grandma’s home-made chocolate chip oatmeal cookies, oatmeal often brings back nostalgic memories. It’s taste and smell provides comfort and satisfaction. 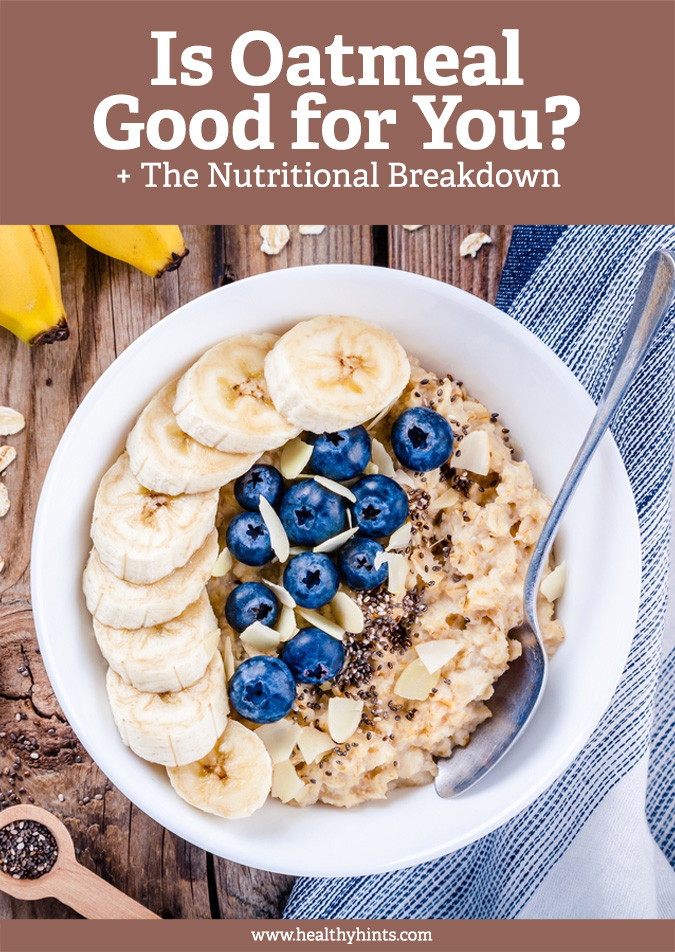 What Exactly is Oatmeal?

Although oats are hulled and crushed, this process does not remove their bran and germ. Because oats are derived from whole oat groats, oatmeal provides a concentrated source of fibre and nutrients (1).

Apparently, wild oats were eaten as early as the Neolithic and Bronze Ages, dating back to around 10,000 BC.

In North America, the term oatmeal is synonymous for porridge, the common breakfast meal that involves heating up the oats, sometimes with added ingredients, to create a creamy texture.

The famous company Quaker Oats began their business in the early 1900s, by selling two pounds of steel-cut oats in paper boxes with cooking directions printed on the outside, rather than selling them in bulk out of barrels (2).

The Different Types of Oats (Is One Healthier Than the Other?)

Nowadays, there are a million different varieties of oats to choose from at the grocery store. It can be quite confusing, and the differences between types of oats is not always clear.

How do you know whether to choose rolled oats, steel-cut oats, or instant oats?

Put simply, the difference between these three types of oats is in the processing method and time for each. Each oat may be more suitable for making different types of foods, such as porridge, cookies or congee.

While it’s important to note that rolled, steel-cut, and instant oats all have the same nutritional profile (since they’re all made from whole oat groats), the points below explain the differences between the three (3, 4): 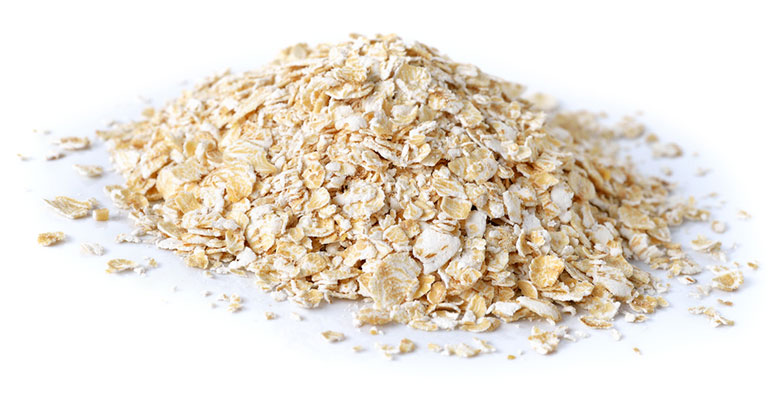 According to the World’s Healthiest Foods, 0.25 cups of unprocessed, dry oats contains (5):

1. Oatmeal is High in Fiber 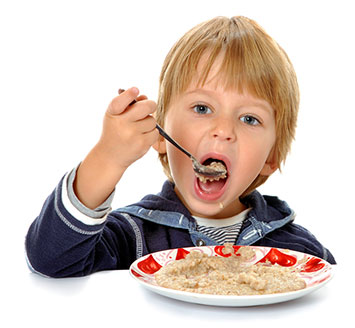 Oatmeal is an excellent source of fiber. A half cup of oats contains around 8 grams of fiber (6). The fiber in oats is divided somewhat evenly between soluble and insoluble fiber, both beneficial to health (7).

The insoluble fibers present in oats include lignin, cellulose, and hemicellulose (8).

According to the Harvard School of Public Health, oatmeal is a great source of soluble fiber, which helps to lower blood glucose levels as well as cholesterol levels (9). Soluble fiber is beneficial for heart health, cancer prevention, and aids in regular digestion. Soluble fiber also helps to slow digestion, increase satiety, and suppresses appetite (10).

Beta-glucan is the main source of soluble fiber in whole oats, which is praised for its anti-cancer properties and prevention of heart disease.  The amount of b-glucan in raw, whole oats ranges between 2-9% (11).

2. Oatmeal is High in Antioxidants

Whole oats are one of the only sources of antioxidants called avenanthramides, which are protective against heart disease (12). Studies have demonstrated that avenanthramides have naturally anti-inflammatory, antioxidant, anti-itch, anti-irritant and antiatherogenic properties (13, 14).

There are many different avenanthramides and phenols present in oatmeal, which aids in its antioxidant and anti-inflammatory activity, and also act as strong ultraviolet absorbers (15). One study in particular provided evidence showcasing the anti-inflammatory and antiatherogenic (prevention of plaque build-up in the coronary arteries) effects of antioxidant avenanthramides that are present in oats (16).

To make the antioxidants in oatmeal most bioavailable during consumption, its best to eat oatmeal with another vitamin C rich food source, such as strawberries or oranges. According to one study, the antioxidant effects of avenanthramides in oats were most effective when they were able to work synergistically with vitamin C, thus protecting the good HDL cholesterol that is protective against heart disease (17).

Oats also contain a few other antioxidants. Feluric acid is a polyphenol antioxidant found in the plant cell walls of oats and other grains (18). Phytic acid is also present in oats, and is an antioxidant known for its ability to improve absorption of minerals in the body, and is responsible for the storage of phosphorous in plant tissues (19). Lignans are an antioxidant present in oats, which help reduce one’s risk of developing cardiovascular disease (20).

Oats are high in a variety of essential vitamins and minerals. Below is a list of the main sources of nutrients contained in oats: 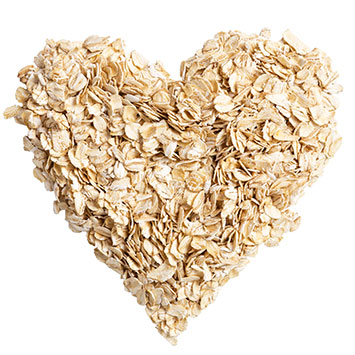 If you currently suffer from heart disease, or are interested in lowering your cholesterol levels, you might want to consider including oatmeal in your diet if you don’t eat this grain already.

Heart disease, or cardiovascular disease, is an umbrella term used to explain conditions affecting the structure and functions of the heart. For example, coronary artery disease is a build-up of fatty materials, calcium, and scar tissue (plaque) in the coronary arteries which prevents the heart from getting enough blood (31).

Many epidemiological studies have shown that the consumption of whole grains lowers one’s risk of coronary heart disease (CHD) (32, 33, 34).

Several nutrients in oats have known potential for reducing risk factors for CHD, including fibre and certain antioxidants such as lignans and avenanthramides (35). Avenanthramides have beneficial heart health properties because of their antioxidant, anti-inflammatory, and antiproliferative effects (36).

Based on past epidemiological evidence, a study was conducted by the American Society for Clinical Nutrition to confirm the health benefits of consuming whole grains–oats included.

A cohort study was conducted of 2286 men and 2030 women aged 40-69 years, whom were free of diabetes at baseline, where food consumption data was collected between 1966 and 1972. A ten year follow-up confirmed that 54 men and 102 women in this study had developed type 2 diabetes.

The study concluded that whole-grain consumption was associated with a reduced risk of type 2 diabetes, mainly due to its fiber content (37).

Another 8-year trial looked at 41,186 African-American women without a history of diabetes who completed food frequency questionnaires at baseline. Nearly 2000 new cases of type 2 diabetes were reported in participants during the 8-year follow-up.

The findings indicate that consuming magnesium-rich foods, such as oats (containing 17% RDI per 0.25 cups) is associated with a much lower risk (~30% lower) of type 2 diabetes in participants of this study (38).

Beta-glucan stands for “biological response modifier” and is an active compound — a soluble fibre — that naturally occurs in the cell walls of cereals, oats included, that positively impact health.

Beta-glucan is an immunomodulator that helps raise your immune system’s response to fight off disease, specifically cancer (39). It’s important to note that beta-glucan modulates immune activity, but never overstimulates, thus its role in cancer prevention.

One study looking at the anti-cancer properties of beta-glucan confirmed that this soluble fiber significantly decreased cancer cells viability, demonstrating strong anti-tumor properties, while for normal cells it was non-toxic (40).

There is also strong evidence demonstrating the positive effects of b-glucan in oats in the prevention of many gastrointestinal cancers (41, 42).

Oats are a known source of both soluble and insoluble fiber. In fact, one bowl of oatmeal contains approximately 8 grams, or 35% of the recommended daily intake of fiber.

Another study researched oatmeal directly. The conclusive evidence shows that oatmeal improves appetite control and increases satiety. These appetite suppressing effects are attributed to the viscous and hydrating properties of b-glucan, a soluble fiber found in oats (44)

[You may also like: Are Bananas Really Good for You?]

Yes, Oats Are Good For You! 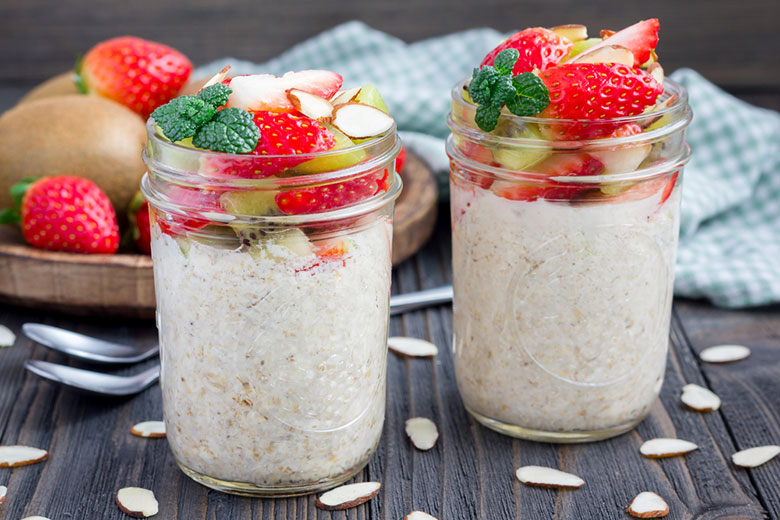 Oats are an amazing grain that have key roles in: reducing cholesterol, reducing heart disease risk, lowering blood pressure, preventing type 2 diabetes, reducing rates of obesity, and preventing of many types of cancers (45, 46, 47, 48, 49).

Oats are also an amazing source of many essential vitamins and minerals including: manganese, molybdenum, phosphorous, copper, biotin, vitamin B1, magnesium, chromium, and zinc (50).

Oats contain lots of fiber, and are especially known for its beta-glucan soluble fiber which helps promote heart health. Furthermore, oats are very high in avenanthramides, feluric acid, phytic acid, and lignans — four powerful antioxidants that promote health in their own unique ways.

Evidently, oats are a very good food to eat, and can help boost your help in a variety of ways.

Oats and oatmeal are sometimes used to explain the same thing. Oatmeal is synonymous for porridge in North America, and is often eaten as a breakfast meal. A half cup or so of oats are heated up with an assortment of added ingredients. Often people will add sugar and cream to their morning bowl of oatmeal, which diminished the nutrient quality of oats.

Oats are delicious with lots of nutrients to offer. Next time you go to make your morning bowl of oatmeal, instead of the added sugars and unneeded fats from dairy cream, try pairing your meal with spices like nutmeg and cinnamon, fruits such as oranges, bananas, apples and berries, and top it off with a dash of maple syrup.