Probiotics are one of the latest things to be praised in the world of diet and health benefits.

Some of these digestive system benefits have either a direct or indirect effect on your weight. There have been many studies done on probiotics, including how they affect different aspects of weight loss. If you continue reading below, you can learn about what probiotics are and what they can do for you in terms of weight loss.

Probiotics are bacteria that live in your body, and you get more of them through virtually any fermented foods such as yogurt, kefir, or other sources, including supplement sources.

Probiotics are what are commonly known as “good” bacteria. 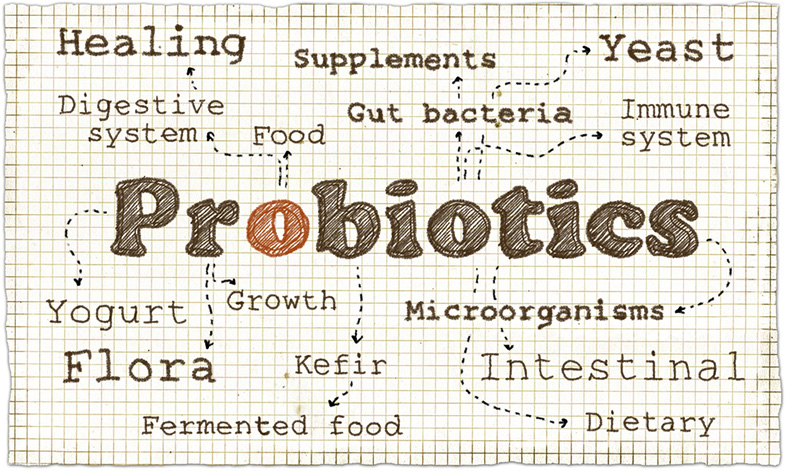 These bacteria primarily live in your guts, and they help maintain balance between themselves and “bad” bacteria.

The importance of probiotics has grown in the last decade, as well as the research on the health benefits of probiotics and putting definition into what each strain does and how it works.

Your body can do one of three things with fat. It can absorb it, burn it, or expel it, usually though waste elimination (bowel movements). A study on lactobacillus gasseri (1) showed that this particular strain of probiotic helps increase the amount of dietary fat that is expelled.

In other words, this probiotic strain helps move more fat to the colon, where it is expelled from the body. Naturally, if the fat is expelled, it is not being absorbed by the body, resulting in added weight. Instead, a probiotic like this can help promote weight loss.

There was another study that was performed on mice, using a probiotic labeled VSL#3. (2) The study found that this particular probiotic is extremely useful in weight loss. This probiotic actually stimulated the release of GLP-1, which is a specific hormone that results in reduced appetite.

From this, we can gather that VSL#3 can help treat or prevent obesity as well as diabete. There do not seem to be any human trials as of yet, but the animal trials are promising.

Probiotics can have a very beneficial effect on existing body fat. A couple of studies were performed on humans, using the strains lactobacillus amylovorus and lactobacillus fermentum (3) and another using lactobacillus rhamnosus (4). Both of these studies found that these probiotic strains can help boost your metabolism.

A boost in metabolism ultimately means more calories and fat burned, which in turn means a reduction in body fat.

Most of the different microorganisms housed in your digestive system are friendly and beneficial. They produce important nutrients such as vitamins B and K. They also help in breaking down dietary fiber, turning it into fatty acids. There are two main types of good bacteria that have been linked to bodyweight regulation. These are bacteroidetes and firmicutes. By having the right ratio of good bacteria, this may ultimately affect where your bodyweight will settle, which could spell the difference between healthy, overweight and obese. (5)

5. Probiotics May Have an Effect on Hormonal Balance

Your gut bacteria is responsible for the release of certain hormones. These may stimulate hunger or produce feelings of satiety. They also control blood sugar, which may affect cravings and appetite. Achieving hormonal balance through healthy gut flora is just another way probiotics can benefit overall weight loss without having to reduce calories. (6)

Things to Consider on Probiotics

Although it would appear that all probiotics can be beneficial for your health in some way, not all strains have shown to have weight loss effects. Some lactobacillus strains, including ingluviei, acidophilus, and fermentum showed a tendency toward weight gain rather than loss, according to a meta-analysis of multiple studies, both on human and animal subjects. The analysis (5) likely did not include some of the studies mentioned above, but the analysis made these statements while validating that some of the lactobacillus strains did indeed have a positive effect on weight loss.

Why Probiotics Help You Lose Weight

Your digestive system is chock full of bacteria, both good and bad. Symptoms of indigestion or other troubles like diarrhea, constipation, gas, bloating, etc., are believed to be the result of the balance of bacteria in your body tilted toward the bad.

With probiotics, the belief is that some balance is restored, thus negating the severity and occurrence of undesirable symptoms.

The increase of probiotic presence in your body works to different results, although the effects occur primarily in the gut and other digestive-related aspects. The health benefits are well-documented, and further study and development is in progress as to how probiotics can help promote weight loss.

As you can see from the studies that were done on probiotics, there is a great potential for weight loss with certain strains. One strain that was mentioned, VSL #3, is actually a probiotic blend that was marketed and tested.

Overall, it seems that factors such as fat absorption, body mass, metabolism, and others were positively affected by this probiotic blend as well as other strains used by themselves.

It should be noted that although probiotics have shown promise as far as weight loss, a proper diet and effective exercise regimen are still the major key players.

(Read this next: 7 Benefits of Kefir for Gut Health)