Is Watermelon Good For You?

Despite being made up of mostly water, watermelon is a nutrient dense fruit offering a generous dose of essential vitamins, minerals, electrolytes and antioxidants. Originally grown in South Africa, watermelon is a vine-like flowering plant grown for its edible fruit (1). 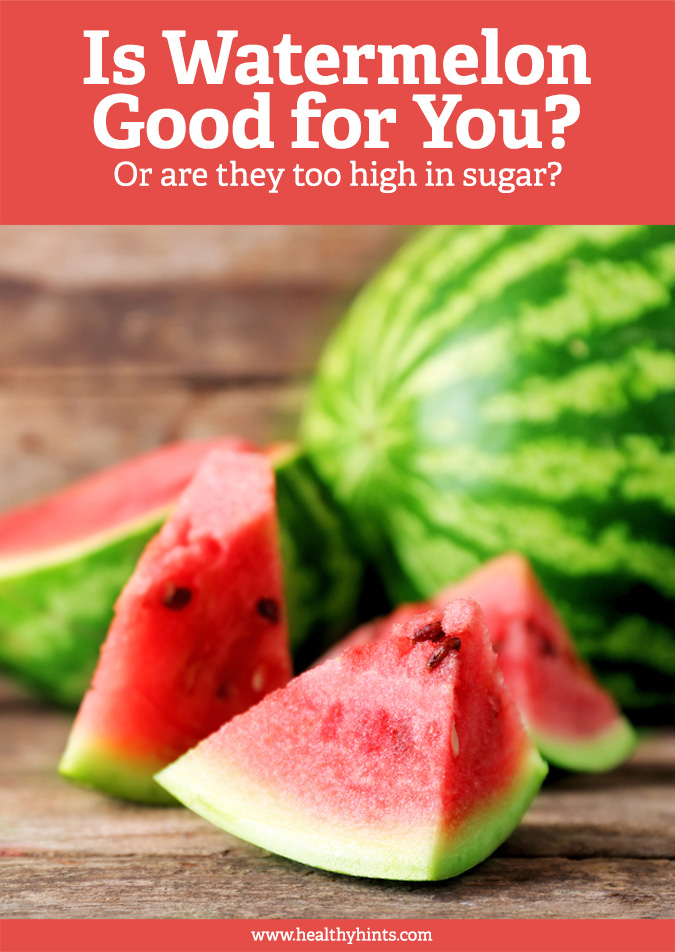 The outside of the fruit (the rind) is green with darker green stripes, while the interior is usually pink to red, but can sometimes be white, orange or yellow. There are a ton of different varieties of watermelon to choose from, some with seeds while others are seedless.

A watermelon slice provides a mouthful of sweetness, and is the perfect summertime snack because of its water content and refreshing taste. Watermelons are a member of the botanical family Cucurbitaceae along with cantaloupe, honey dew melons, squash and pumpkin.

There is mounting evidence supporting plant-based nutrition (2, 3). A plant-based diet can help decrease the risk of cancer and heart disease, lower blood pressure, reduce rates of obesity, and prevent diabetes (4). Fortunately, watermelon is a plant, and we will outline the many amazing benefits of this fruit below.

Relevant to its name, watermelon consists of 92% water (5). Because of its extremely high water content, watermelon is considered to be a very healthy fruit to snack on. Not only is watermelon a rich source of water, this fruit is also a good source of electrolytes.

One cup of watermelon provides around 170 milligrams of potassium, an electrolyte that helps refuel and rehydrate cells and muscles, aids in proper muscular contraction, and helps maintain stable blood pressure (6). Watermelon helps to replenish electrolytes that are lost through sweat, and maintains the water balance in cells.

The high water content in watermelon also helps with digestion. A known way to avoid constipation, or slow digestion, is by staying well-hydrated. The water in watermelon helps to keep the food you eat moving smoothly through your intestines, and maintains the flexibility of your gastrointestinal tract (7).

Watermelon not only tastes great, but this fruit contains many nutrients that are beneficial to overall health. 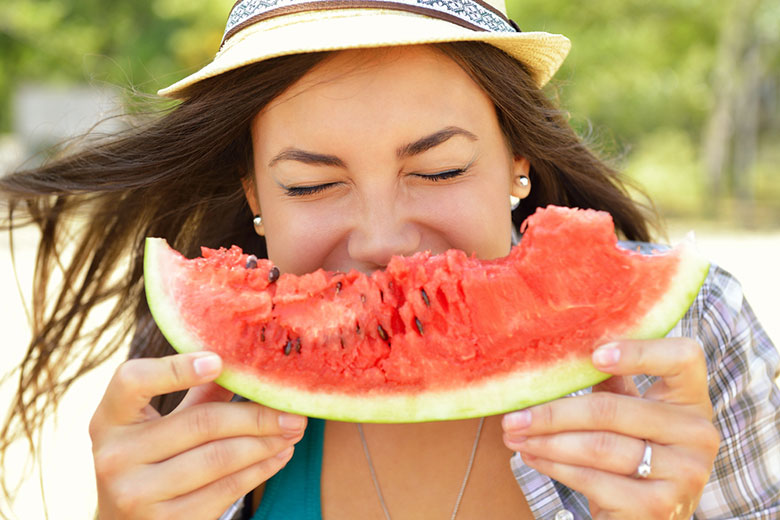 Lycopene is a carotenoid which provides the inside of a watermelon with its rich red color. A carotenoid is a pigment that acts as an antioxidant within the body, protecting against cellular damage by fighting off free-radicals, reduces the effects of aging, and protects against many chronic illnesses (19)

Tomatoes are famous for their lycopene content, but watermelon is also a great source of lycopene at 15-20 milligrams per every two-cup serving (20). This is great news considering adults are recommended to consume around 9 milligrams of carotenoids per day, and a deficiency of lycopene can be a contributor to heart disease and some cancers.

A recent study demonstrated that along with providing antioxidant and anti-inflammatory benefits, the lycopene content in watermelon remains stable over time. Watermelons stored at 21 degrees celsius actually increased in lycopene content by 11-40%, and beta-carotene content, which we will discuss below, increased by a major 50-139% (21).

Surprisingly, the darker the color of red on the inside of the watermelon, the more nutrient dense it becomes. It’s safe to say that watermelons offer a generous dose of lycopene, a powerful antioxidant. Next time you buy a watermelon, you can store it on your countertop and wait until it’s at its peak ripeness to consume.

Another antioxidant carotenoid found in watermelon is beta-carotene. B-carotene is a pigment found in carrots and colorful fruits such as watermelon, and is the precursor to vitamin A production inside the human body (22).

“Beta-carotene is considered an antioxidant and is also a precursor to vitamin A. This compound helps maintain healthy skin and also plays a vital role in eye health. Individuals who consume the necessary levels of beta-carotene can lower their risk for coronary artery disease, stroke, macular degeneration, and other age-related diseases (23).” 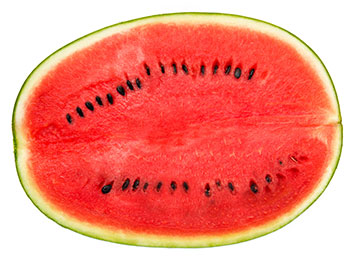 Watermelon is a rich supply of the non-essential amino acid citrulline. Citrulline is involved in the nitric oxide system in the body, is an antioxidant and vasodilater, and is converted by our kidneys into another amino acid called arginine. Arginine plays major roles in cell division, wound healing, and detoxification by removing ammonia from the body (26).

The above study shows that watermelons are a rich source of citrulline, and that the often forgotten watermelon rind contains a high amount of this amino acid as well.

Another scientific body of work titled “Watermelon: the value of higher plasma arginine concentrations” outlined a few valid and important points as it reviewed the study we cited above. The article mentions arginine’s vital role in improving cardiovascular and immunological functions, and also outlines its role in regulating body metabolism. Furthermore, the article goes on to mention how high blood levels of arginine (from watermelon intake) was also shown to help reduce fat mass and improve insulin sensitivity. These are huge findings considering the obesity and diabetes epidemic that exists in North America.

The triterpenoid phytonutrient cucurbitacin E is a biochemical compound found in plants and is known for its anti-inflammatory, antioxidant, anti-cancer and hepatoprotective (prevents damage to the liver) properties that help to prevent and treat many diseases (29).

Because of the anti-inflammatory properties of triterpenoids, such as cucurbitacin E, they have proven anticancer and immunomodulatory potential, and have also been shown to protect against degenerative diseases (31, 32).

When Should You Avoid Watermelon?

Individuals who are sensitive to ragweed pollen may also be allergic to watermelon. The allergy is rare, but it does exist. Foods such as watermelon may contain small traces of ragweed pollen, which can be attributed to oral allergy syndrome.

Different than oral allergy syndrome, some individuals may actually be allergic to specific particles in the watermelon fruit itself. These three allergens in watermelons that may cause a reaction are called triose phosphate isomerase, profilin, and malate dehydrogenase (34).

Another way you may be allergic to watermelon is because of something called a FODMAP. Apparently, watermelons contain short-chain carbohydrates called FODMAPs that some individuals are unable to digest (35). If you are an individual who is sensitive to FODMAPs, the symptoms may arise as indigestion, bloating, and stomach cramps.

If you are allergic to ragweed pollen, the allergens in watermelon itself, or have serious digestive issues such as irritable bowel syndrome, you may want to reconsider eating watermelons.

Watermelons Taste Amazing and They Are Healthy, Too! 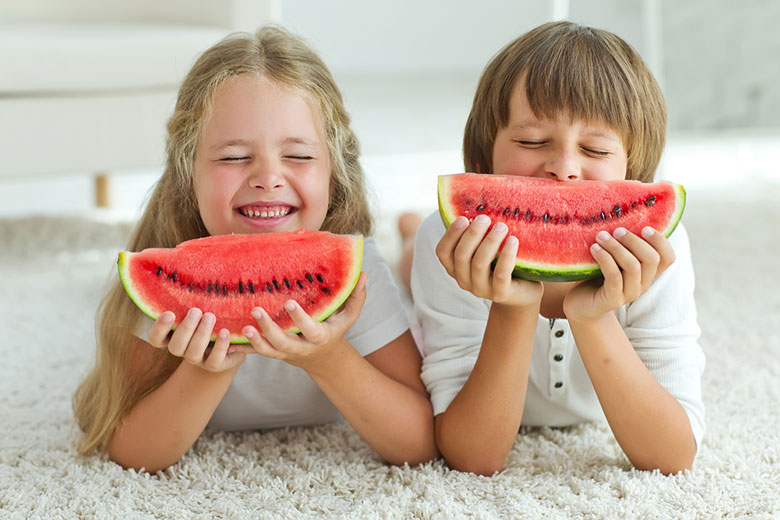 If you are one of the lucky bunch that are not allergic to watermelon, consider this great news. Watermelons are a juicy fruit that taste amazing, are a refreshing treat, and are surprisingly packed with lots of nutrients.

Watermelons contain a wide variety of essential micronutrients including: vitamin C, copper, biotin, potassium, vitamin A, vitamin B1, B5, & B6, and magnesium. Not only that, but they offer all of these nutrients and contain only 50 calories per serving.

Lastly, watermelons contain another powerful antioxidant by the name of cucurbitacin E. Cucurbitacin E is under the umbrella of a phytochemical group called triterpenoids. Cucurbitacin E is celebrated most for its anti-cancer and anti-inflammatory effects in the body (37).

Extremely hydrating and beneficial to your health, make sure to add watermelons to your next grocery list.

“Because watermelon contains so many different phytonutrients—as well as key vitamins and minerals, as well as dietary fiber—your health is going to be improved by any watermelon variety that you choose (38)”